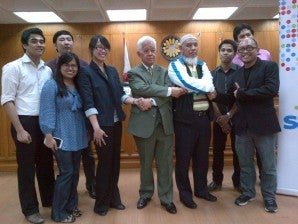 MANILA, Philippines – The Commission on Elections (Comelec) launched Wednesday a website and a mobile application that aim to help “inform, educate, and empower voters.”

Dubbed “e-leksyon 2013,” the free app allows users to fill out a sample ballot, know more about the campaign rules and regulations, locate the nearest precinct in their area, and report violations of campaign rules.

“As we move closer to the May 13 elections, we see the informational and educational features such as the practice sample ballot will be important in making sure that their votes will count,” Comelec Spokesman James Jimenez said in a statement during the launch.

“We hope that this can be an additional channel for voters’ education,” he said.

The app was developed through a joint effort by Comelec and Bitoopi, a group of computer programmers from Smart Communications Inc. who volunteered to develop the program free of charge.

Comelec chairman Sixto Brillantes Jr. thanked the group for their initiative and said that it their efforts are a big contribution to the Comelec’s drive to educate the public.

The app is already available for iOS devices through the Apple app store while an Android version will be available soon. The web version is accessible through any PC, laptop, or tablet computer at http://report.mycomelec.tv.

“The team behind Bitoopi who generously gave their time and effort to make the official e-leksyon services for Comelec are young voters and quite representative of a new generation of ‘apptivist’ developers who make apps and services for social good,” Ramon Isberto, Smart public affairs group head, said in their statement.