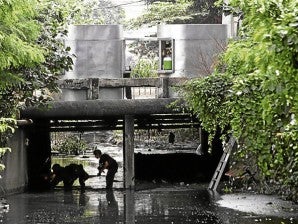 SHOOT-OUT IN MAKATI. Police operatives gun down a suspected member of a car theft ring who tried to escape through a creek near the corner of Ayala Extension and Gil Puyat Avenue in Makati City on Wednesday. NIÑO JESUS ORBETA

In response to a series of carjackings in Metro Manila, operatives of the National Capital Region Police Office (NCRPO) and Criminal Investigation and Detection Group (CIDG) went after the members of two notorious car theft and robbery groups in separate operations in Makati and Quezon City on Wednesday, leaving seven of them dead.

Of those killed, five were from the Lintag Group—a notorious gang believed to be behind a series of car thefts and bank robberies in the metropolis and nearby provinces.

The other two belonged to the Onad car theft and robbery group.

The police, however, did not come out of the encounters unscathed. A rookie policeman was killed while another was wounded, along with a bystander.

CIDG Chief Director Samuel D. Pagdilao Jr. said they had yet to identify the five men who were killed in a shoot-out with operatives of the CIDG’s Special Task Group “Maverick” and Quezon City police at 4:30 a.m. Wednesday on Congressional Road in Quezon City.

Three other members of the gang were able to escape.

Maverick chief Senior Supt. Rhodel O. Sermonia said that the gang members were in two vehicles—a brown Toyota Innova (ZDX 875) and a black Toyota Fortuner (NFO 492)—when they were flagged down by the police operatives on Luzon Avenue.

However, they refused to stop and started firing at the lawmen who were forced to retaliate.

Recovered from the five men were three M-16 rifles, two .45-calilber pistols, five light blue T-shirts with the word “Pulis” written on them and a pair of license plates.

The group, which was on the CIDG watch list of organized crime groups, had been under surveillance for more than a month before yesterday’s encounter, Sermonia added. 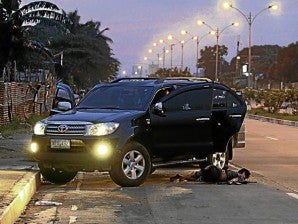 Insp. Elmer Monsalve of the Quezon City Police District’s Criminal Investigation and Detection Unit said that they found in one of the five dead men’s pockets some papers which indicated that the group was planning to rob a bank in the area.

In Makati City, two suspected members of the Onad car theft and robbery group were killed in a shoot-out with agents of the NCRPO Regional Police Intelligence Operation Unit (RPIOU) at around 4 a.m.

However, a member of the police team, PO1 Mudzil Ali Balawag, passed away while being treated at Makati Medical Center for a gunshot wound in the chest.

Another policeman, Chief Insp. Joselito Savares, and a bystander identified only as “Waway” were wounded.

Supt. Jaime Santos, Makati police officer in charge, said the two dead gang members were identified as Dave Garcia and Mark Ferrer based on identification cards found on them.

Based on a police report, NCRPO-RPIOU operatives were following members of the group who were in a gray Ford Escape (ZBK 640) in an open parking area near the corner of Tindalo Extension and Buendia Avenue when a shoot-out broke out.

“The Ford Escape had reportedly been left in the parking lot since Tuesday night. It appears that they just went back to retrieve the vehicle, maybe to operate again judging from the number of firearms found inside the car,” Santos told reporters.

One of the car theft suspects died on the spot while his companion ran toward the creek beside the Makati Post Office and hid inside a sewage pipe.

He then shot Savares who had crawled into the pipe after him. Waway, a scavenger, was caught in the crossfire and hit in the abdomen.

Santos said they used tear gas to flush out the car jack suspect who was later found dead due to a gunshot wound in the head.