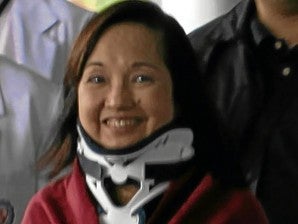 BEST WISHES. Arroyo was all smiles when she left the hospital on Aug. 5 after her first surgery. CONTRIBUTED PHOTO

Former President Gloria Macapagal-Arroyo’s seven-hour follow-up surgery at St. Luke’s Medical Center on Wednesday was “unsuccessful” because doctors found a “very rare” infection that prevented the replacement of implants in her spine.

Dr. Juliet Gopez-Cervantes said the infection had caused fluid to collect in Arroyo’s cervical spine and dislodged the titanium plates that surgeons had installed 12 days ago.

“It is unfortunate that this happened. We did everything,” Cervantes, Arroyo’s chief physician, told reporters in a briefing just before 6 Wednesday night.

“If there is word that says the surgery [was] unsuccessful—I know you wanted me to address that… It was unsuccessful probably because as of now we cannot replace the implant yet. We have to first treat the infection,” Cervantes said.

Earlier in the day, Arroyo’s husband, Jose Miguel “Mike” Arroyo, told ABS-CBN reporters that the surgery did not turn out well.

“It was not successful. When they opened it, they saw there was an infection, so she will rest for three weeks, then they will operate on her again,” he said.

Cervantes said that with no internal support in her cervical spine, Arroyo had an “external fixation” in her neck that would be attached to a brace once she wakes up and is able to sit up and move around.

The infection must be treated before a third surgery can be performed to install a new set of implants in Arroyo’s spine, Cervantes said.

The former President, now a representative of Pampanga’s second district, is expected to be moved to the hospital’s coronary care unit for close monitoring.

Cervantes said Arroyo’s family, among them son Dato and daughter Luli, had been briefed on her condition.

“They understand the problem. They are very supportive, especially Luli, because most of the time she’s the one we interact with. She understands everything; she’s very intelligent and I can just praise her for being there every time,” Cervantes said.

She said Arroyo would remain in the hospital for at least a month to allow treatment of the infection, which, according to experts, occurs in spinal surgery patients in a “0.54-percent chance.”

Cervantes said only members of Arroyo’s immediate family would be allowed to see her.

“She will not be bedridden but she may not be able to function normally, the way she did as a congresswoman,” the doctor said.

Doctors still could not pin down the source of the infection.

“[But] there was this possibility that the infection came from [the patient’s] throat, because the bacteria that was seen under the microscope is common in the pharyngeal or throat area,” Cervantes said.

Arroyo had swollen vocal cords when she was discharged on Friday—a condition that doctors said then was not related to her first surgery and was caused by “abuse.” Arroyo was allowed to use the phone and entertain visitors in her last two days of confinement last week.

“Oral antibiotics will not be sufficient,” Cervantes said. “There is a tendency for this infection, if we’re not aggressive with management, to progress… The chance of improvement and complete resolution of the infection is very good, but [the infection] is really very rare,” she said.

Arroyo was in the operating room from 9 a.m. to around 5:45 p.m. Wednesday, longer than her initial surgery on July 29.

Cervantes said doctors first removed the dislodged implants then found fluid in the same area because of the infection.

“The surgeons had to clean that area and since there is this finding, they cannot place another implant. Otherwise, it would be another source of infection,” Cervantes said.

When asked if the second surgery was done prematurely, she replied in the negative.

Cervantes said the hospital had made sure every room where Arroyo stayed during her first surgery and recovery period were bacteria-free.

“When the immune system of an individual is low or weak, whatever is the reason—physical stress, emotional status and everything—it’s multifactorial. It is really difficult to isolate at this point,” Cervantes said.

Asked if Arroyo’s current condition could make a third surgery even more difficult, the doctor said: “I think if we are able to control the infection, the third surgery will not be as difficult as today’s surgery. But of course, we have to evaluate on a day-to-day basis.”

Cervantes expressed optimism that Arroyo would get well soon.

“The chance of recovery, as long as we address the problem, is still high. The problem was caught at an early stage but we have a good fighting chance… I think we have to move forward. We have no way but to fight back,” she said.