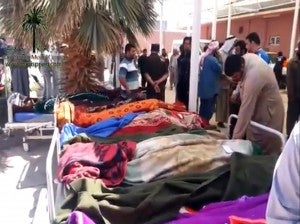 The unrest, which also included the kidnapping of a soldier by armed protesters, was the deadliest so far linked to demonstrations in Sunni areas that erupted more than four months ago.

The protesters have been demanding the resignation of Shiite Prime Minister Nuri al-Maliki and railing against the alleged targeting of their community by the authorities.

Tuesday’s violence broke out before dawn when security forces entered an area where demonstrations have been held since January near Hawijah, west of Kirkuk province’s eponymous capital, according to army officers, who gave an overall toll of 27 people killed there and around 70 wounded.

But accounts differed as to the spark for the bloodletting in the northern Iraqi province.

One of the officers, a brigadier general from the army division responsible for the area, said the operation was aimed at Sunni militants from a group known as the Naqshbandiya Army, and that security forces only opened fire after they were fired upon.

A second officer said 34 Kalashnikov assault rifles and four PKM machineguns were recovered at the scene.

Two soldiers were killed and seven wounded in the operation, while the remainder of the casualties were a combination of protesters and militants, the officers said.

Protesters, however, insisted the army had provoked the clashes.

Security forces “invaded our sit-in today, burned the tents and opened fire indiscriminately and killed and wounded dozens of protesters,” Abdulmalik al-Juburi, a leader of the Hawijah sit-in, told AFP.

“We only have four rifles to protect the sit-in, and there are no wanted people among us,” Juburi said.

Thirteen gunmen were killed carrying out attacks on army checkpoints in the Al-Rashad and Al-Riyadh areas of Kirkuk province, the army officers said.

“There have been fierce clashes, which led to the killing of 13 revolutionaries against the policy of the government,” Juburi said.

“When they heard the news about the killed and wounded in the sit-in, sons of the tribes from all the villages in Kirkuk cut the roads and attacked checkpoints and military headquarters and took control of some of the checkpoints for a short time,” he said.

Armed protesters later killed six Iraqi soldiers and kidnapped a seventh near Ramadi, west of Baghdad, burned two armoured personnel carriers and held the soldier at the site of their sit-in on the highway, police First Lieutenant Ibrahim Faraj said.

And gunmen attacked checkpoints in the Sulaiman Bek area in Salaheddin province, sparking clashes in which five Iraqi soldiers and one gunman were killed, and six other gunmen wounded, said Ahmed Aziz, a member of the local municipal council.

Two ministers quit in the wake of the initial violence on Tuesday, bringing the number of Sunni cabinet ministers who have resigned since March 1 to four.

“The minister of education, Mohammed Ali Tamim, resigned from his post after the Iraqi army forces broke into the area of the sit-in in Kirkuk” province, an official from Deputy Prime Minister Saleh al-Mutlak’s office said.

Tamim is a member of Mutlak’s National Dialogue Front, and is from Hawijah.

Parliament speaker Osama al-Nujaifi later said at a news conference that science and technology minister Abdulkarim al-Samarraie told him by telephone that he too was quitting.

Agriculture minister Ezzedine al-Dawleh quit on March 8 after a protester was killed in northern Iraq, and finance minister Rafa al-Essawi, some of whose bodyguards were arrested on terrorism charges in December, announced his resignation at an anti-government demonstration on March 1.

Tuesday was not the first time that anti-government demonstrations in Iraq have turned deadly—security forces killed a protester in the northern city of Mosul on March 8, and eight demonstrators near Fallujah, west of Baghdad, on January 25.