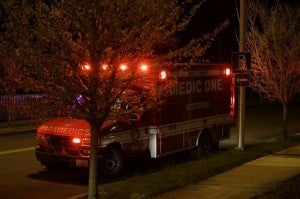 Officers responding to an emergency call at 9:30 p.m. Sunday at the apartments in Federal Way found two injured men on the ground in a parking lot.

“When we arrived, there was a lot of gunfire already being fired and multiple calls, 911 calls of gunfire,” said Federal Way police spokeswoman Cathy Schrock. One of the men reached for a gun as police moved in to assist the two on the ground, she said.

At that point, other officers opened fire. The suspect died but police said it wasn’t immediately clear if it was from their gunfire.

The other man on the ground and a third man in the parking lot were found dead.

In a search of the complex, police found a fourth man dead in one apartment and a slain woman in another unit.

Schrock said police were trying to determine if the woman was accidentally hit by gunfire.

There was no immediate word what set off the shooting.

“We’re gonna continue to go door to door in hopes that we can find some additional witnesses, and hopefully we won’t be finding any more victims.” Schrock said.

After police flooded the scene and carried out searches of the area, authorities said they did not think another shooter was on the loose or that there was an immediate threat to the public.

There were no reports of any officers being injured. The names of the five people who were killed were not immediately available.

Federal Way is about 20 miles (30 kilometers) south of Seattle.