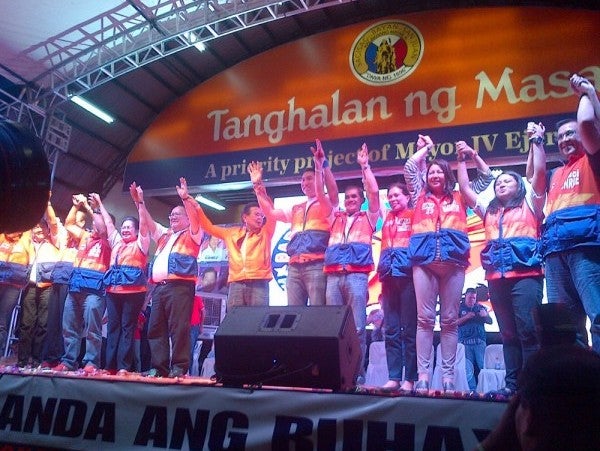 MANILA, Philippines – Team PNoy candidates may have the upper hand in the latest Social Weather Stations [SWS] survey but the United Nationalist Alliance (UNA) has all the reason to celebrate as its bet Nancy Binay shot up to the 3rd to 4th spot.

Senator Francis “Chiz” Escudero, who is running under Team PNoy, on the other hand slid to the fifth place.

It was not the first time Escudero was pushed from second place but this time he was pushed out of the top three spots in the top 12.

The said survey was conducted in the wake of the controversial clash between Escudero and the parents of his girlfriend, actress Heart Evangelista.

Securing the top nine spots in the list – seven from the administration team and two opposition bets— were declared “safe” by the survey.

Pimentel used to be in the 5th-7th places but he dropped four points in the latest survey. Estrada’s score, meanwhile, dropped by five points.

Taking the 10th-11th places were former Movie and Television Review and Classification Board chief Grace Poe-Llamanzares and re-electionist Senator Antonio Trillanes IV, who had 39 percent each.

Poe, Trillanes, Enrile, Honasan, Zubiri and Magsaysay were vying for the last three spots in the Magic 12, according to the SWS.