Teddy Casiño: Leftist but not communist 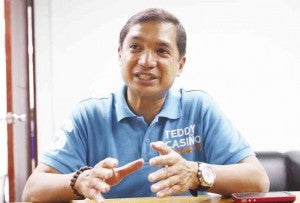 An activist? Yes. A communist? No.

Teodoro “Teddy” Casiño swears he’s neither a member of the Communist Party of the Philippines (CPP) nor a lapdog of Jose Maria Sison, the self-exiled founding chairman of the Maoist movement.

But the 44-year-old former acolyte whose boy-next-door image often betrays his decades-long experience as a student activist and street parliamentarian says his label as a “leftist” lawmaker may just propel him to the Senate in next month’s elections.

“In my campaign sorties, some people would tell me, ‘We will vote for you because you fight for us,’” Casiño told Inquirer reporters, columnists and editors last week.

“Others would say, ‘We want you in the Senate because we want new (leaders) there.’ It’s very encouraging. You can feel the warm acceptance of my candidacy,” he said.

He said even members of political dynasties and parties allied with Team PNoy and the United Nationalists Alliance had openly expressed support for him.

Some of them, he claimed, even hosted his campaign sorties in the provinces because his political party, Makabayan, a coalition of 12 party-list groups, was strapped out of cash.

Casiño, who is on his third and last term as Bayan Muna representative in the House, believed that his track record as a lawmaker would overcome whatever negative impact his being identified with left-leaning groups would have on his candidacy.

But do voters really ask him about his affiliation with the CPP and activist party-list groups?

No, Casiño replied. This has never been brought up in any of his political sorties since he began his senatorial campaign in February, he said.

“That’s not an issue. The usual comment I get was, ‘You’re a fighter. It was you who fought against Gloria,” he said, referring to former President Gloria Macapagal-Arroyo. “You’re OK because you stand up for the people,’” he said.

But because of previous government and military propaganda, Casiño lamented that the public commonly associated leftist groups with the New People’s Army, the CPP’s armed wing.

“It’s not the left tag, but the NPA tag. Some people have reservations about the left because there’s always the NPA connection. But when it comes to platforms, principles, social justice and fight for human rights, people agree (with the left) 100 percent.”

Told that the perceived communist influence was a legitimate concern among voters, Casiño maintained that his legislative agenda was never dictated upon him by either Sison or the CPP.

Despite the “red tag,” he insists he is his own man.

“My track record,” he said, “is more significant than the tag. For me, these are just labels. The important thing is what we have accomplished—the projects, investigations, legislation. Our record speaks for itself. We have expanded because of the people’s support.”

“We get ideas from all kinds of people. They’re noted and taken. But ultimately, we make our own decisions based on our program, our platform. We’ve shown that for the past 12 years that we were in Congress.”

“If there’s somebody who can give directives to me, it’s Satur because he’s our party president,” he said, referring to the Maka-

“We came from the same strand of the left. There are same issues where we are together. You could probably say that I’m a reaffirmist. But the national democratic movement (is) not necessarily communist.”

Casiño said he had publicly denounced the NPA’s alleged atrocities in the past, particularly the bloody purge in the communist movement in the late 1980s.

“Is there a communist with a teddy bear?” Casiño quipped. “What we do is simply explain that being ‘left’ doesn’t necessarily mean you espouse the armed struggle. You can be ‘left’ and work within the parliamentary constitutional arena.”

Casiño, a sociology graduate of University of the Philippines-Los Baños, said his senatorial run “in the bigger scheme of things is an effort by the ‘left’ to move up in mainstream politics. We have nothing to lose and everything to gain.”

“I know it’s a big challenge. But it doesn’t start and end with one election. If we don’t win, we have 2016. And it’s not necessarily me the next time around,” he said.

In the last senatorial election, Makabayan endorsed Liza Maza and Satur Ocampo, who both lost.

Casiño said the Senate, dominated by political clans, millionaires and the landed elite, lacks a voice of the ordinary person.

“The Senate makes laws for all, so the ordinary people should be represented, too,” he said, adding that there had been good bills by party-list groups that had passed the lower House but were not sponsored in the Senate.

Casiño runs “a very cheap campaign” by tapping the party-lists’ machinery. His campaign manager, Nathanael Santiago, said they had so far spent only P3.7 million.

A usual day for the senatorial candidate includes a short run in the morning, visits to public markets, a motorcade, lunch with local leaders, assemblies and meetings with sectoral groups until the evening. He sometimes joins the house-to-house visits of mayoral candidates.

“I’m doing very good in surveys, except in SWS and Pulse Asia,” he said, citing informal mock polls in newspapers, websites, sectoral groups, schools and in a convenience store chain.

Asked if his critical stance against the popular Aquino administration may be affecting his ratings, Casiño said some had advised him to tone it down but he maintained that the issue with President Aquino was a matter of policy questions and not a personal one.

Casiño is against K + 12 because he believes shortages (teachers, classrooms, textbooks) must be addressed first before adding two years in high school.

“The basic problem is not the length of schooling but the quality of instruction,” he said.

He also calls for the reinstatement of the P16 billion slashed by the Department of Budget Management in the 2013 budget proposal of state colleges and universities. He said these institutions also get an annual 10-percent increase in the budget, like other government agencies.

Casiño opposes the administration’s public-private partnership program, saying it is an abdication of government responsibility and results in higher cost of public services and utilities.

“Like their solution to the power crisis in Mindanao, we’re against it. Privatization leads to higher electricity rates. Why don’t they tap Mindanao’s renewable sources of energy?”

He believes the government should revive the Sabah claim to get negotiations rolling instead of keeping it dormant. He also calls for the abrogation of the Visiting Forces Agreement and the Mutual Defense Treaty with the United States.

As for calls to legalize same-sex marriage, Casiño said it’s something that should be discussed first with stakeholders.

He said the divorce bill should now be tackled, while the grounds for annulment of marriages should be expanded and the process must be made cheaper.

Little is said publicly about Casiño’s upbringing as a devout Catholic, eclipsed by the “Red tag.”

The former altar boy said he had considered becoming a priest or a La Salle Brother. But it was his oldest brother who became an Augustinian priest. He was married in Church and he regularly hears Mass, together with his wife, Ruth Cervantes, and their two boys, Elian, 9, and Emilio, 5.