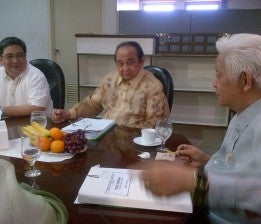 Facing reporters for the first time since his appointment, Guia said that he has not officially taken his oath and was told by President Benigno Aquino III to “do good.”

“I will be just one of the seven commissioners, its a collegial body,” Guia said. He will likely take his in the Comelec head office on Monday, he added.

Guia, the current acting executive director of the Legal Network for Truthful Elections (Lente), said that even though he worked in the Comelec as an election lawyer, he would still have to make a few adjustments.

“I came from here so maybe this is just like me coming back,” Guia said.

“Im not new to the reform efforts outside and within Comelec,” he said.

When asked if there was any order from Aquino when he was appointed, Guia said: “No particular order, he just said ‘do good.'”

He said that he was still working on the smooth transition in Lente to the younger officers before he could fully take on the job in Comelec.