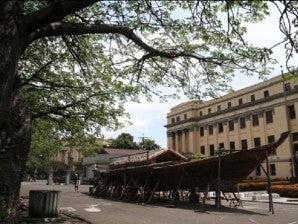 MANILA, Philippines—Curators and employees of the National Museum are calling for the resignation of the institution’s top two executives over alleged unpaid benefits, harassment and oppression.

“We want them replaced,” the NMRFEA members told the Inquirer in an interview, referring to the two officials. “The management has not implemented any single provision of our CNA; even the granting of our CNA incentive was rejected because they claimed there is no fund.”

The Inquirer tried but failed to reach Barns and Labrador for comment. A staff of Barns said he was in a meeting, while Labrador is out of the country.

According to Aida Llave, NMRFEA president, the cultural institution has P2.2 million in savings, which should have been divided among the 271 employees and officials of the museum.

“Fifty percent of that amount is intended for our incentives, 30 percent for facilities for the rank-and-file employees and the remaining 20 percent will be given back to national treasury,” she explained.

The group likewise claimed that employees critical to the management continue to experience harassment and oppression from the officials.

Llave said the most recent incident happened early this week when Barns issued a memo saying a preliminary investigation was being conducted to determine whether formal charges would be filed against some employees for questioning Labrador’s supposed official travel to Paris, France, from April 1 to 27, 2013.

NMRFEA officials earlier wrote Foreign Affairs Secretary Albert del Rosario, asking him to take appropriate action against the issuance of a visa to Labrador, whom they claimed has no approved and valid appointment from the Civil Service Commission (CSC).

“Her appointment is only good for one year, that is from March 26, 2012, to March 25, 2013, thus the whole duration of her travel, Dr. Labrador will no longer be connected to the National Museum,” the group said in its letter to Del Rosario.

The CSC, in separate rulings in April and May last year, said Barns’ and Labrador’s positions were non-career and coterminous with the appointing power, in this case former President Gloria Macapagal-Arroyo. The commission also pointed to a CSC rule that bars consultants, contractual and non-career employees from being designated to positions that exercise control or supervision over regular and career personnel.

But Barns and Labrador were rehired by the new board appointed by President Aquino.