No hometown votes for this Bicol candidate 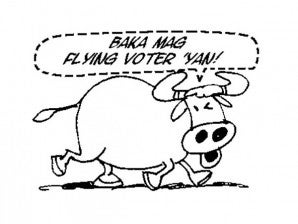 NAGA CITY—He is a legitimate candidate for governor of Camarines Sur, but he cannot vote for himself or for any of the candidates for provincial positions on his slate.

Jose Anselmo “Joel” Cadiz, the former solicitor general who is running under the ruling Liberal Party (LP), is prohibited to vote for any provincial candidate in Camarines Sur because he is a registered voter of Naga City.

The city belongs to the third congressional district of Camarines Sur.

But Cadiz is qualified to run for any provincial elective position under the law that created the independent chartered city of Naga.

Because of the provision banning registered voters from Naga from electing provincial officials, the ballots for the city were printed only with the names of candidates for city, congressional and senatorial positions and party-list groups, said Fatima O. Gados, the Naga City election supervisor.

Asked what the law would mean for his candidacy, given that he cannot count on the hometown vote, Cadiz said: “It’s our people who will decide and with God’s grace, we will make it.”

“Naga voters are very important to me. But in their place, the vast majority of our long-suffering people in the province want change,” he said.

Cadiz, who is being supported by his classmates from Ateneo de Naga High School (ANHS) Class of 1974, faces the formidable Villafuerte family—Rep. Luis R. Villafuerte and grandson Miguel Luis—in the five-sided gubernatorial race.

He said a resident of Naga City could actually win the gubernatorial race, as what happened in the case of Luis Villafuerte himself, who was a Naga City resident when he first ran and won the governorship in 1988.

Lawyer Carlos Cortez, a high school classmate who is Cadiz’s campaign manager, said funds for the campaign come mainly from ANHS Class ’74 members “who continuously volunteer money, facilities and time” to push the candidacy of Cadiz.

Cortez returned from the United States in October last year to give his full support to his classmate. He immediately buckled down to organizing networks, starting in the town of San Fernando, the hometown of the LP’s congressional candidate for the second district, Sabas Mabulo.

He said they have established a network of contact persons—barangay political officers, or BPOs—in Iriga City and 32 of the province’s 35 towns.

“Our battering ram is the antipolitical dynasty issue against the Villafuertes who are fielding four family members in gubernatorial and congressional races,” said Cortez.

Aside from the two Villafuertes in the gubernatorial race, Nelly, the wife of Luis, is running for the third district congressional seat to be vacated by her husband against Leni Robredo, the widow of the late Interior Secretary Jesse Robredo. Luis Raymund (“LRay”), the outgoing governor and the estranged son of Luis, is challenging reelectionist Rep. Diosdado “Dato” Arroyo for the second district congressional seat.

Cadiz, Cortez and the late Jesse Robredo were classmates in grade school at the local parochial school and at ANHS.

According to Cortez, they conducted two- to three-hour orientation meetings in Camarines Sur towns where their barangay (village) political officers discussed the antipolitical dynasty issue focused on the Villafuertes, and transparency and good governance, family values and the anticorruption plan that was the legacy of Jesse Robredo.

Cortez said that Cadiz’s gubernatorial run would not be in vain even if he loses because “what is more important is the advocacy against political dynasties which he sees will go on beyond the elections.”

“You cannot underestimate the silent majority of barangay folks and the level of tolerance for the members of the same family claiming the gubernatorial post for decades,” said Dr. Andy Guimpaya, another classmate of Cadiz.

Rachelle Rustia, 17, a sophomore journalism student at Ateneo de Naga University and a youth volunteer for Cadiz, said she was introduced to the candidacy and antidynasty advocacy of Cadiz during the school alumni homecoming last year.

“At first, I only wanted to join the campaign because it was an opportunity to go around the province for free. But later on I understood what Cadiz was advocating for, so that I now enjoy helping in explaining the importance of ending [the] political dynasty in Camarines Sur,” Rustia said.