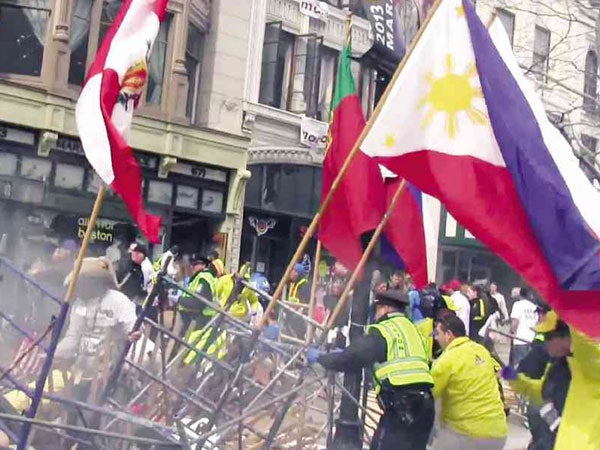 PHILIPPINE TRICOLOR One of the two deadly explosions that marred the Boston Marathon occurred near a row of national flags that included the Philippine tricolor. The blasts killed three people and wounded over 144, 17 critically. TV GRAB

WASHINGTON—US President Barack Obama on Tuesday branded the Boston bombings a “cowardly” act of terror, but said it was still unclear if a foreign or domestic group or individual was behind the attacks.

“This was a heinous and cowardly act,” Obama said at the White House. “Any time bombs are used to target innocent civilians, it is an act of terror.”

Obama said while the impact of the attacks near the finish line of the Boston marathon on Monday, which killed three people and wounded more than 170 others, were clear, the motives and the identify of those responsible was not.

“What we don’t yet know, however, is who carried out this attack or why, whether it was planned and executed by a terrorist organization, foreign or domestic, or was the act of a malevolent individual,” he said.

But the president again vowed to bring whoever was behind the assault to justice, and warned that America would not be cowed by terrorism.

“We also know this—the American people refuse to be terrorized,” he said.

In frank and direct language, Obama vowed to keep Americans up to speed with developments in the investigation and asked them to remain vigilant.

“What I have indicated to you is what we now know. We know it was bombs that were set off. We know that obviously they did some severe damage. We do not know who did them,” he said.

“We don’t have a sense of motive yet. So everything else at this point is speculation.”

Obama on Tuesday ordered flags on the White House, US federal buildings, military installations and naval vessels lowered to half staff to honor victims of the Boston bombings.

The billowing Stars and Stripes atop the White House was lowered after Obama signed a proclamation ordering the mourning ritual.

Flags will remain at half staff until sunset Saturday in memory of at least three people killed and more than 170 injured in the explosions near the finish line of the Boston marathon on Monday.

Defense Secretary Chuck Hagel also said Tuesday that the deadly twin bombings at the Boston Marathon finish line were a “cruel act of terror.” He vowed that those who are responsible will be brought to justice.

Testifying on Capitol Hill, Hagel was the first Obama administration official to refer to terror or terrorism after the bombings Monday killed three and wounded more than 140 people Monday afternoon.

Hagel said any event in which explosive devices are used is clearly an act of terror.

“As the president said yesterday, we still do not know who did this or why and a thorough investigation will have to determine whether it was planned and carried by a terrorist group, foreign or domestic,” Hagel told the House Appropriations defense subcommittee. “It’s important not to jump to conclusions before we have all the facts, but as the White House said last night, ‘Any event with multiple explosive devices, as this appears to be, is clearly an act of terror and will be approached as an act of terror.'”

Hagel mentioned the Pentagon’s connection to the race, with many in the defense community participating in the race and commended the quick work of the Massachusetts National Guard to assist after the explosions.

Gen. Martin Dempsey, the chairman of the Joint Chiefs of Staff, also praised the National Guard. Dempsey was testifying with Hagel.

Hagel said the thoughts and prayers of those at the Pentagon are with the people of Boston.

“You can describe it in a lot of different ways, but it was a terrorist attack of some sort. … There’s just not enough information at this time,” Boehner told reporters Tuesday at a news conference.

At the House hearing, Rep. C.W. Bill Young, R-Florida, pressed Hagel about Pentagon plans to disband one of the civil support teams that responded to the attack in Boston. Young said Congress was notified in a March 29 letter that the two teams, one based in New York, the other in Florida, would be disestablished.

Hagel insisted that the teams would remain and said the budget proposal that the administration submitted last week included money for the teams.

The FBI on Tuesday pledged to go “to the ends of the earth” to find those responsible for the Boston Marathon bombings, noting that it did not receive any threat warnings before the attack.

FBI Special Agent Rick DesLauriers told reporters in the aftermath of Monday’s attack that while investigators were fanning out across Boston, there was “no known imminent physical threat at any location” in the area.

“It will be a worldwide investigation. We’ll go to the ends of the earth to identify the subject or subjects who are responsible for this despicable crime and we will do everything we can to bring them to justice,” DesLauriers said.

The agent also said the US Federal Bureau of Investigation was “not aware of any threat information prior to the marathon.”

Officials put the new toll from the attacks in the northeastern US city at three dead and more than 170 wounded, many of them with traumatic leg injuries, indicating the explosive devices were placed low to the ground.

Massachusetts Governor Deval Patrick said only two bombs were used in Monday’s carnage near the finish line of the marathon, and no other other unexploded devices had been found despite earlier reports to the contrary.

“It’s important to clarify that two and only two explosive devices were found yesterday,” Patrick said.

“Our thoughts go out to all of those injured and killed,” he said.