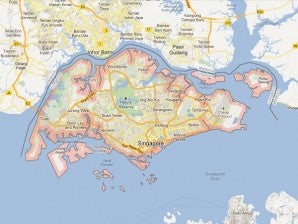 The Land Transport Authority (LTA) said it would launch a one-year trial on June 24 to provide free travel to commuters who arrive at 16 designated metro stations in the city center before 7:45 a.m. on weekdays.

Commuters who arrive at the stations between 7:45 a.m. and 8:00 a.m. will be given a discount of up to 50 cents from their train fare.

“The objective of the trial is to encourage commuters who are able and willing to make changes to their travel schedule to travel earlier into the city area before the peak hour,” LTA said in a statement.

“It is part of the government’s effort to try to alleviate the morning peak hour crowding situation on trains in the short term.”

Congestion on the metro has fed resentment, with some citizens accusing the government of not doing enough to control numbers of foreign workers who they accuse of competing with them for jobs, housing and space on public transport.

The discontent spilled into general elections in 2011 when the ruling party garnered its lowest-ever vote count after more than 50 years in power, and in two by-elections after that won by the opposition.

The move to give free train rides also comes as operators of the city-state’s Mass Rapid Transit system work to repair public trust after a series of breakdowns since 2011.

Some commuters said they would take up the offer.

“Given that I am a morning person, I might actually change my travel plans as I don’t mind getting to work early,” corporate communications executive Shanta Arul, 25, told AFP.

A spokeswoman for the LTA said the year-long trial is estimated to cost the government Sg$10 million (just over $8 million).

Read Next
Pakistani Taliban deny Boston Marathon blasts
EDITORS' PICK
Disease expert: Omicron variant may behave like Delta
Palace: Malls, establishments may require customers to use of face shields
This new condo in the South will make you want to turn a new leaf
Smart offers wireless fiber-like speeds to Filipino homes with country’s first 5G Prepaid Home WiFi
Syringes for Pfizer vaccine arriving on December 2 — NVOC chairperson
Legarda: Ending Violence Against Women, a cause for all
MOST READ
Bongbong Marcos to face another disqualification case
Christine Bersola, Julius Babao cleared of cancer after colonoscopy, endoscopy
Former PM Abe says Japan, US could not stand by if China attacked Taiwan
Tropical storm intensifies as it approaches PAR
Don't miss out on the latest news and information.