Live the teachings of the past for a better future 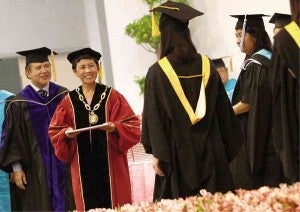 CEU PRESIDENT Padolina hands out certificates to graduates
with the help of Dr. Carlito Olaer, VP for student affairs.

Develop your internal drive. This was the first piece of advice this year’s commencement speaker gave to the Class of 2013 of Centro Escolar University (CEU)-Malolos.

At the low-key and old-fashioned ceremonies held at the university’s Centrodome, National Historical Commission Chair Maria Serena I. Diokno addressed the 359 men and women who had to endure the summer weather in full graduation regalia for this much-awaited milestone in their lives.

A baccalaureate Mass and a time-honored tradition unique to CEU, the Sampaguita Interlude, had preceded, by a few days, the 34th commencement exercises.

Speaking in Filipino, Diokno told the graduating class that all individuals were the historical agents for their own lives, and their power for such would grow as they go through life’s different stages.

She said that in a study of 21 civilizations throughout the world’s history, English historian Arnold Toynbee found that the more difficult challenges, rather than the easy ones, had 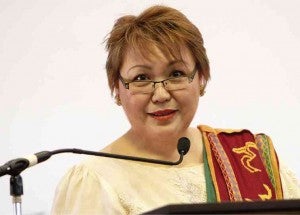 DIOKNO: Bad things happen because we don’t do something to stop or prevent them.

resulted in humankind’s greatest achievements. For example, she said, the Chinese civilization grew out of the continuous flooding of the Yangtze and Yellow rivers, while Egypt was formed because they needed to learn how to drain the Nile river to bring water to the Sahara Desert.

Although she somewhat agreed with Toynbee, Diokno said, it would be more salutary and effective if, instead of relying on external drive, people acted as a result of their internal beliefs and values.

In all her years of teaching, Diokno said, “I have observed that the best students in class are not always the smartest (there are smart people who are lazy) but the students with the internal drive to improve themselves, those who don’t wait to be told what to do but take advantage of every opportunity to develop their knowledge and skills on their own.”

She also noted that it was human nature to blame others for one’s mistakes and shortcomings instead of owning up to them, but Harry Potter author J. K. Rowling was right.

“There is an expiry date on blaming your parents for steering you in the wrong direction; the moment you are old enough to take the wheel, responsibility lies with you,” she said, quoting Rowling. 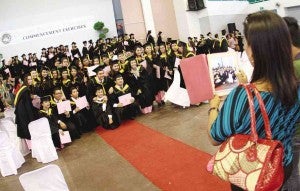 THE CLASS of 2013 says “cheese” for digital posterity.

“You may blame your parents and professors for your shortcomings,” said Diokno, “but you can only do so to a certain point. After this phase, you are responsible for whatever you become.”

Diokno’s second piece of advice to her young audience was to accept the consequences of their decisions and actions and to always consider the effects of such not only on themselves but also on others.

“Bad things happen because we don’t do something to stop or prevent them,” she said. To stay silent or not give a damn about any wrongdoing is one way of abetting the action.

According to studies on risk, she said, man’s default action is to accept the status quo. “But if we look back on the history of the world, or on our own past, we will find stories of people who acted on their own to change the status quo, regardless of personal cost.

“The revolution that fought for our independence, for example, was launched by women and men your age who had a clear vision of the future they wanted for the Filipino nation,” said Diokno. 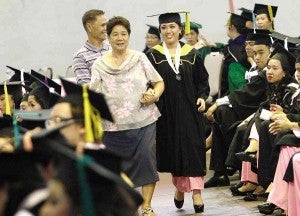 AN HONOR student walks all smiles and arm-in-arm with mom after receiving her medal.

She noted that 2013 marks the 150th anniversary of the birth of Katipunan supremo Andres Bonifacio. She reminded the graduates that the hero from Tondo had believed in the power of his people to create a nation where there would be freedom and equality for all.

Diokno ended her speech with a reading of the 10 teachings in Bonifacio’s “Dekalogo” as well as those found in the version by his wife Gregoria de Jesus.

“I have nothing to add to the advice of Andres and Oryang,” she said. “Just think: The answers to your questions and the problems of today can be found in the teachings of our forefathers who gave their lives for us. What the next generation expects from us is not for us to lay down our lives but for us to live those teachings so the future may be better for our country and our children.”

The Class of 2013 will soon find out if they can heed Diokno’s counsel, not to mention Bonifacio’s. They were conferred degrees in pharmacy, dental medicine, nursing, tourism management, hotel and restaurant management (HRM), information technology, business administration, computer science and information system, mass communication and psychology. 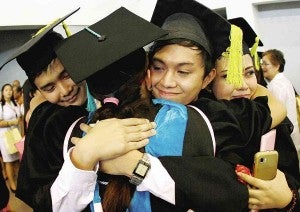 Emotional group hug after the ceremonies; an alumna, finally

CEU’s Malolos branch was founded in 1978 to provide higher education to students of northern Luzon, particularly the provinces of Bulacan and Pampanga. The 7-hectare campus is situated along MacArthur Highway.

The continuous upgrading of the curriculum has come hand in hand with the improvement of facilities. The university built a teaching hotel on campus for its HRM and tourism students. Named after CEU cofounder Librada Avelino, the Ada Hotel replicates a five-star hotel facility, complete with suites and a coffee shop. The gymnasium, where the commencement ceremonies were held, can seat 5,000 people and serves as a major sports venue in the Bulacan area.

“We have big plans for CEU Malolos,” said Padolina, who makes weekly visits to the Bulacan branch in her capacity as president and chief academic officer.

Many of this year’s graduates may have big plans of their own, too. The four or five years they have spent on this campus have hopefully steered many of them toward the right direction and bequeathed to them the friends and the proficiencies they will need for life. Most will be out looking for jobs soon, spurred by self-motivation, as Diokno had hoped. But if truth be told, their education has just begun.

(We thank the schools that invited us to witness their graduation ceremonies this year and regret that we had time only for the CEU Malolos rites. We hope to feature a different school’s graduation rites every year. )