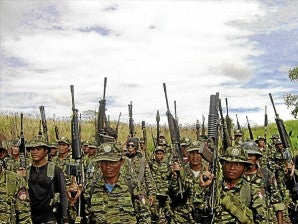 “The MILF’s formula to solve the Moro Question in Mindanao is very simple … Let the Moros run their affairs. Let them decide their own destiny. Let them succeed or self-destruct. Gone [are] the days when the government in Manila designed everything for them,” the rebel group said.

“The most important element here is self-determination … This is a right that cannot be foreclosed by any agreement or [be] the subject of negotiation,” it said.

But this will likely require an amendment of the Constitution, University of the Philippines law professor Harry Roque told the Inquirer on Tuesday.

“It sounds like a federal state consisting of the Philippines and the state of Bangsamoro,” Roque said in a phone interview.

“You can’t just do that by legislative action, but through a constitutional amendment,” he said.

“[The MILF’s] best comparison is Puerto Rico, which is part of the United States but has its own government. That’s not total independence,” she said in an interview.

Puerto Rico became a US territory in 1917, but with its own legislative, judicial and executive branches. Puerto Ricans were granted statutory citizenship through an act of Congress.

Noel was present at some of the MILF’s consultations with the people parallel to the peace talks.

“They’re only asking for territories that are contiguous and highly populated by Muslims. If you look at Zamboanga, what they’re asking for is a small barrio at the tip of Zamboanga,” she said.

But Roque proposed that instead of a federal state, the two negotiating panels review the law creating the Autonomous Region in Muslim Mindanao (ARMM) with a view of bringing about “genuine and full autonomy.”

“One model is the autonomy granted by England to Northern Ireland. That’s worth studying,” he said.

“There is nothing to fear in this proposal because the substate, as the name connotes, is still part of the Philippines. It has no army, except police and internal security forces, tasked to do policing within the substate,” it said.

The rebel group also said the ARMM, which was formed when the Philippine government signed a peace agreement with the Moro National Liberation Front in 1996, was “a far cry” from the envisioned substate.

“The recent postponement of the ARMM elections speaks loudly why this entity is not autonomous. It is controlled, nay dictated [to], by Manila,” it said.

He said this might be one of the reasons behind the unprecedented meeting between the President and Murad in Tokyo.

Casiple said that after the scrapping of the MILF’s Memorandum of Agreement on Ancestral Domain with the Arroyo administration, “a new generation of fighters” began questioning the group’s decision to pursue peace talks with the government.

He said Mr. Aquino’s surprise trip to Tokyo was apparently meant to present to the rebels the government’s “bottom line,” or the “non-negotiables” that would mark how far the administration was willing to make concessions.

“The President would not have gone there just to make introductions. I think very substantive matters were discussed, but they are hiding the meeting’s agenda,” Casiple said.

But he said this was understandable because peace negotiations were “very sensitive.”

“Tokyo was chosen because it was the nearest. The others were in the Middle East and European capitals,” Casiple said.

He said that Mr. Aquino had invested a “great amount of political capital” in meeting with Murad, and that a peace agreement was likely.

“Statements that a peace agreement might be reached before the end of his term might be pessimistic. The tendency of these negotiations, especially if the bottom lines are made clear, is for these to be hastened. So, it might be sooner than later,” Casiple said.