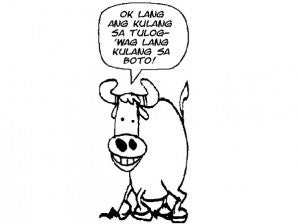 Rep. Mitos Magsaysay and her entourage were on a 5:25 a.m. flight to Misamis Occidental on Thursday in yet another backbreaking schedule that would take them to at least five more provinces up north this week.

Magsaysay, her voice occasionally failing in the morning, was catching up on sleep, a rarity for most senatorial candidates in this stretch of the campaign for next month’s elections.

Seated across the aisle on the third row was a fellow UNA candidate, ex-Tarlac Gov. Margarita “Tingting” Cojuangco. She had a concern of her own. A cat bit her left foot during a recent sortie in Laguna. It required eight antirabies and antitetanus injections. She’ll get the last shot when she gets back to Manila.

Little sleep, infernal heat, occasional sickness or, in the case of Cojuangco, a terrible cat bite are all part of the game to win a seat in the Senate.

But both Magsaysay and Cojuangco insisted that they were undaunted, especially with just a month to go before Election Day.

They remain unfazed, or so they claim, even if the two major survey firms have consistently put them at the bottom rung of prospective winners in the senatorial race.

“I don’t believe that 1,200 people (the usual number of respondents) can actually disrupt my wanting to serve the country,” Cojuangco told reporters before going on a campaign motorcade here yesterday morning.

Magsaysay was similarly dismissive of the Pulse Asia and Social Weather Stations surveys, questioning why her ratings had basically not been moving since the surveys began.

“From the start, someone told me that they would nail me to that number,” she told the Inquirer.

Survey results notwithstanding, Magsaysay and Cojuangco have been diligently campaigning. They were on the road and at public markets here in the morning and in the afternoon. They were joined by Audrey Zubiri, who represented her husband, former Sen. Juan Miguel Zubiri, also an UNA senatorial candidate.

Cojuangco said she had not missed a group sortie while Magsaysay said she had skipped only the last one in Leyte. But she said that was because she campaigned in nearby Cebu.

The coming weeks are expected to become even more hectic for the two women and others in the UNA slate.

They returned to Manila on Friday morning but flew to Kalibo later that day at 2:30 p.m. They courted voters in Aklan, Antique and Iloilo. They were scheduled to return to Manila on Monday.

They will barnstorm Nueva Ecija the following day and, barring last-minute changes in schedule, will motor to Pangasinan, La Union and Ilocos the rest of the week.

Capiz was initially included in the Iloilo leg but the Inquirer learned it was postponed because Vice President Jejomar Binay, one of the senior UNA leaders, could not join them.

The province is the political bailiwick of Interior Secretary Mar Roxas, Binay’s likely rival in the presidential election three years from now.

Read Next
In gold they trust: Cold cash for ‘scrap’ jewelry
EDITORS' PICK
Is your company a growth champion? Stand up and be recognized!
Joe Biden sworn in as 46th U.S. president, urges end to ‘uncivil war’
PUP accord with DND also faces termination
4 senators want military, cops off UP campuses
Acer Philippines welcomes you to its first flagship store
New Year, New Rediscoveries
MOST READ
Trump’s parting gifts to Biden: Roaring stocks, a weaker dollar, tons of debt
Biden says Trump wrote him ‘very generous letter’
A shade at Roque? Vice asserts being a comedian, not a clown
Makati Shangri-La to close its doors temporarily starting Feb. 1
Don't miss out on the latest news and information.