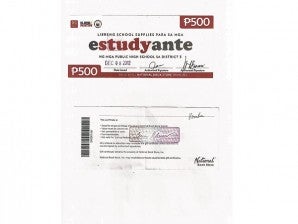 A PHOTOCOPY of a December 2012 gift certificate that UNA says is just among many distributed in time for the campaign. CONTRIBUTED PHOTO

CITY OF SAN FERNANDO—The United Nationalist Alliance (UNA) said it had asked the Commission on Elections (Comelec) to investigate the use of gift certificates by a group closely associated with the ruling Liberal Party (LP) to allegedly woo votes for LP candidates.

But while Navotas Representative Toby Tiangco, UNA secretary general, described the practice as “massive and nationwide,” he admitted that UNA had documented only one case of gift certificate distribution by the group Kaya Natin!

The gift certificates were from a popular book and drug store and worth P500 and P1,000. Some were dated December last year but distributed at the height of the campaign period, according to UNA.

“This is a serious issue of vote-buying because it was timed during the local campaign, and it is clear money was involved,” Tiangco said in a statement. He cited one case in Quezon City.

Reached for comment, Kaya Natin! convenor Harvey Keh said what Tiangco was “perhaps referring to is the Estudyante program that Kaya Natin!, together with Quezon City Rep. Jorge Banal and the Quezon City [government], has implemented to provide free school supplies and educational materials to public high school students from the third district of Quezon City.”

The program, he said, has been going on for three years.

The movement was founded by a group of politicians, among them the late Interior Secretary Jesse Robredo, former Pampanga Gov. Eddie Panlilio and former Isabela Gov. Grace Padaca, now an election commissioner.

On its website, Kaya Natin! urged Tiangco to resign as UNA campaign manager if he could not produce proof that the gift certificates also bore the names of four Team PNoy candidates. The four are Ramon Magsaysay Jr., Risa Hontiveros, Bam Aquino and Sen. Aquilino “Koko” Pimentel III.

“The Liberal Party and any member of the Team PNoy slate have never been involved in this project at all nor have we had any meetings with the LP or Team PNoy’s leaders to discuss this said project,” Kaya Natin! said.

Gift certificates, instead of cash, were given to ensure the funds would be used for school supplies, according to Kaya Natin! These were distributed on March 7. Kaya Natin! said it endorsed the four candidates on March 20.

“Should he (Tiangco) fail to present concrete evidence to back his accusation, we also challenge him to hold himself accountable for these malicious lies that he is spreading by immediately and irrevocably resigning from his post as campaign manager of UNA, since apparently it escapes him that he should focus more on actually campaigning for their candidates’ platforms and competencies rather than focusing his energies on black propaganda,” said Kaya Natin!