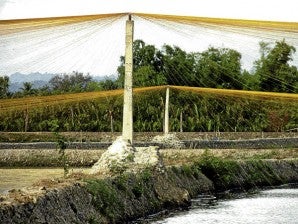 NYLON ropes radiating from center posts stop birds from descending into the fish ponds, protecting the stocks in the process. GABRIEL CARDINOZA

To a passerby, the ponds in a sprawling fish farm along the highway in Barangay Tocok in San Fabian, Pangasinan, seem odd but attractive enough to merit a close look.

Each pond is covered with what looks like giant canopy of mosquito nets. Up close, however, these are really small,

orange nylon ropes radiating from the top of a concrete pole at the center toward the perimeter mud dikes.

The nylon strands actually serve as bird deterrent. Their net-like arrangement discourages birds from landing on the farm by making them believe that the area is dangerous to them.

“Scarecrows no longer work these days. Birds are not afraid of them anymore,” Crisostomo says.

With the new spread, he says, birds would no longer feast on the fingerlings.

“But more importantly, our stocks would remain healthy and protected from fish diseases because we have eliminated the possibility of contamination from disease-causing bacteria that birds may be carrying,” Crisostomo says.

But he points out that his farm’s bio-security measures are not confined to threats coming from the air alone. They include protecting the ponds from possible intrusion of water coming from nearby fish farms.

“That’s why we have installed nets at the farm’s entrance canals and we regularly monitor the river because there are times when the neighboring ponds release water. We don’t want this water to get into our ponds,” Crisostomo says.

Visitors are also only allowed limited access to the area as a bio-security precaution. 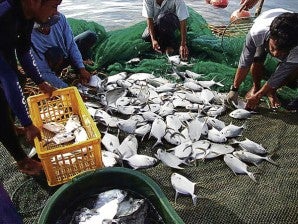 FARMERS remove “pompano” fish harvested from one of the ponds.CONTRIBUTED PHOTO

The system seems to pay off. After barely 10 months of operation, the fish farm has attracted not only curious motorists but also national and international agricultural agencies and enterprises.

“What is fast gaining recognition is the technology that we are adopting, our openness to new fish pond technology. They have recognized the business that we have undertaken to develop fish culture in Pangasinan,” Crisostomo says.

“I believe that when our customers see this, they know that we are serious in our business,” he says.

As a result, he says, these agencies and enterprises have ordered fingerlings for distribution to towns in the Ilocos region, particularly those in Pangasinan and La Union.

The fish farm has impressed officials of a private agricultural corporation based in Thailand when they explored possible business ventures in the area.

Crisostomo says he has been receiving invitations to various agricultural forums all over the country to talk about their experience.

But while most Pangasinan fish farmers ventured into bangus or tilapia raising in their ponds and cages, Crisostomo’s group went into high-value fish culture, beginning with pompano. He says it is their share in promoting growth and development of the fishery industry in the province.

If everybody raises bangus and tilapia, he says, there will be an oversupply and prices will go down.

“Bangus and tilapia are the easiest fish to grow. And it’s not only in Pangasinan but in other provinces as well. We believe there is also a potential market for other fish varieties,” he says.

Pompano, he says, may not be saleable in the public market because it is expensive. But he says its potential is in the region or Asian market.

“The Chinese market in Asia is a vast potential market. The Chinese all over Asia are fond of fish, especially during special occasions,” Crisostomo says.

Crisostomo says what has fueled their enthusiasm to go into the high-value fish production business is the encouragement and support given to them by the Bureau of Fisheries and Aquatic Resources’ regional office.

“We attended their training; they provided us information and shared experiences with us,” he says.

“Pangasinan is already producing bangus more than what we consume. Besides, we would like them to have higher profit through high-value species, which are priced two or three times higher than bangus. And the difference of producing them is not that big,” Domenden says.

More than a business

Crisostomo says that as it improves its fish farm, his company is also committed to taking care of the environment around them.

“We have dredged the Bolasi River to allow free flow of waters coming from the hills and then to the ocean. That will also be a deterrent to the flooding in the area. We have to take care of the rivers because that’s the source of life of the fishponds,” he says.

He says the company has already started to plant mangroves surrounding the area, with the help of village officials of Tocok and Bolasi.

“So this is not just business. We also want to give our share, together with the residents of the community, to protect the environment that sustains us,” he says.