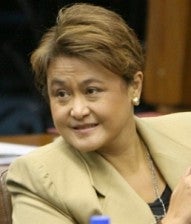 At a campaign sortie here on Friday, Aquino pointed out how Madrigal’s fierce look could easily scare away corrupt people—a look that is scarier than that of Tyson.

“Si Jamby Madrigal, kapag nakikita natin sa kanyang mga posters sa  television, maaliwalas ang mukha dahil hindi kayo tiwali [When we see her posters, her face looks fresh  because  we are  not corrupt],” the President said when she introduced Madrigal, who was absent at the  proclamation rally held at the Peace Center Compound in Barangay (village) Poblacion, Buluan.

He said he has known Villar for being straightforward, and a person  who  stands by her words.

“So pag sinabi po nya, magiging hanep ang buhay kung maraming hanap buhay. Alam ko po pag si Cynthia nasa Senado, magkakatotoo yan [So when she says  life would better if there  are more jobs available.  I know that it will come true when Cynthia is elected in the Senate),” he added.

Villar is the wife of outgoing Senator Manny Villar, who lost to Aquino during the 2010 presidential election.

The President endorsed all 12 senatorial bets of Team PNoy  during the rally although only four were present when he was giving  his speech –re-electionist Senators Loren Legarda and Aquilino “Koko” Pimentel III, former Akbayan Representative  Risa Hontiveros and Benigno “Bam” Aquino IV, the President’s cousin.

Former Senator Ramon “Jun” Magsaysay and Aurora Representative Sonny Angara, who are also running under the administration team, came and joined the rally but left even before the President arrived.