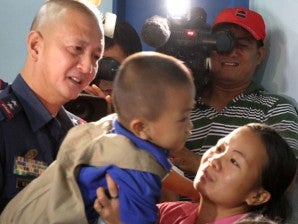 Asked who his father was, 3-year-old John Gabriel Calimag pointed at the police officials and the other strangers around him.

“You see how young children easily take to people?” Chief Supt. Leonardo Espina said as he presented the boy in a media briefing on Thursday, when Calimag was returned to his parents four days after disappearing in his Quezon City neighborhood.

John Gabriel was the latest on the growing list of young children who had been reported missing—some allegedly abducted—in the metropolis over the past few weeks, prompting speculations that a human trafficking or an “organ-harvesting” syndicate was prowling the streets. Police have allayed such fears but nevertheless formed Task Force Sagip Angel to intensify the search and look for any pattern.

Also on Thursday, Pasay police chief Senior Supt. Rodolfo Llorca said a 9-year-old boy who identified himself only as “Pinoy” was turned over to his men by a traffic enforcer who found the child under a bridge near Heritage Hotel on Roxas Boulevard.

Llorca said the boy, who said he got lost after taking a bus ride to Manila from Naic, Cavite province, identified his father as “Erwin.”

In the case of Calimag, it turned out that he was simply left unattended by his parents and wandered away from home in Barangay Pinyahan, Quezon City, on Sunday. A man then travelling with his family at MRT Kamuning station later encountered the boy and took him under their care.

Alexander Cruz of P. Zamora Street, Pasay City said he was at the MRT station to see customers for his money lending business when two street boys approached him, carrying the crying Calimag.

The Cruzes, by then aware of the rumors about the alleged syndicates, decided to take the boy home for safekeeping.

Later, Cruz’s 8-year-old daughter recognized John Gabriel’s face in TV news reports. He then hand-carried a letter Wednesday night to Pasay Police Community Precinct 5, informing the officers that the boy was with his family.

John Gabriel was brought to the precinct early Thursday and was back in the arms of his tearful, grateful parents—Grace and Joel Calimag—in the afternoon.

“I call on other parents: Don’t do what we did. Don’t be negligent with your children,” Joel said in Filipino, choking on his words.

Grace said she was asleep when John Gabriel went missing late Sunday. Joel said he left the boy playing in their house but the latter may have followed him when he went to a nearby market.

Grace said her son was reportedly seen and taken by street children who later brought him to the MRT station.

“We can only hope everyone is like the Cruz family who had good intentions and who took care of John Gabriel,” said Espina, director of the National Capital Region Police Office.

Three other children who were recently reported missing in Metro Manila remain unaccounted for.

They are Dayne Buenaflor, 3, and James Naraga, 4, both of Taguig City, who were last seen March 27 in Barangay Wawa; and Jael Flores, 4, of Parañaque, whose disappearance was reported to the Philippine National Police–Anti-Kidnapping Group in November last year.