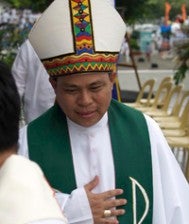 MANILA, Philippines—Even in Basilan, the churches are full.

A Catholic prelate said this on Thursday as he and other bishops continued to debunk the Social Weather Station (SWS) survey showing that the number of Filipinos going to Church had gone done down by more than half in the last 20 years.

Basilan Bishop Martin Jumoad said that in his province, where Muslims form the majority and Catholics just comprise a fourth of the population, churches were full of worshipers on Sunday.

Other bishops said they saw a “political motive” behind the survey, with retired Archbishop Oscar Cruz pointing to Malacañang as the “culprit.”

“In the first place, I question the survey. Who are the people behind the survey? And why are they trying to pin down the Catholic Church? What is their motive?” Jumoad said in an interview with Church-run Radio Veritas.

Jumoad, who had been a bishop of Isabela, Basilan, since November 2001, said he did not see a decline in the number of Catholic worshipers on Sundays.

“Here in Basilan, we are a minority but we are very strong. In fact, the churches here in Basilan are always full whenever we have our Sunday Masses,” he said.

Archbishop Cruz, former president of the Catholic Bishops’ Conference of the Philippines (CBCP), said that the survey was meant to “undermine” the Church and that Malacañang was behind it.

“The Catholic Church in the country must be a big pain in the neck to the present administration …. It has therefore become imperative to undermine the Catholic Church—such as by the supposed survey result of Catholics becoming non-Catholics,” Cruz said.

“After all, Malacañang is decided in passing the divorce bill and the ‘mixed marriage bill’—and the Catholic Church will once more surely speak and act against them,” he added.

Cruz said the Aquino administration wanted to undermine the Church because it has been trying to mobilize its flock to vote against candidates who supported the controversial reproductive health (RH) bill.

Sorsogon Bishop Arturo Bastes said that instead of decreasing, attendance in Sunday Masses in his diocese had gone up.

“I do not believe on that (survey) because the number of people going to Mass is going up. Last Holy Week, we had so many people in church. So, as far as Sorsogon is concerned, I don’t believe in that survey,” Bastes said.