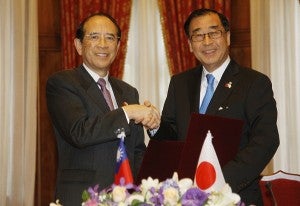 TAIPEI—Taiwan and Japan Wednesday signed a fishing rights accord for waters near islands at the center of a territorial row that has soured ties between Beijing and Tokyo, officials said, with China expressing serious concern about the deal.

Under the agreement, Taiwanese trawlers will be permitted to fish in waters off East China Sea islands controlled by Japan as the Senkakus, but also claimed by China and Taiwan as the Diaoyus.

“Under an equity and mutual benefit principle, the agreement has solved the fishing issues stretching for 17 years,” said Liao Liao-yi, head of the Association of East Asian Relations, a quasi-official Taiwanese body in charge of exchanges with Japan in the absence of diplomatic ties.

Talks over fishing rights started in 1996 but were suspended in 2009, before being resumed in November last year.

“It also marked a milestone in the bilateral relationship of the two countries,” said Liao, after Taiwan and Japan wrapped up a new round of talks — the third since last year — in Taipei.

Liao signed the agreement on behalf of Taiwan while the Japanese delegation was led by Mitsuo Ohashi, head of the Interchange Association.

Beijing voiced its concerns when asked about the agreement at a regular press briefing on Wednesday.

China’s foreign ministry spokesman Hong Lei said: “We express serious concern at Japan’s signing a fishery agreement with Taiwan. We hope Japan can truly abide by its commitments regarding Taiwan, and act prudently and appropriately.”

China still considers Taiwan part of its territory awaiting unification even though the island has ruled itself since 1949 at the end of a civil war.

Under the agreement reached on Wednesday, Taiwanese fishermen will be able to operate in an overlapping 200-nautical-mile exclusive economic zone claimed by Taipei, Tokyo and Beijing.

This area spans the sites of 97 percent of fishing disputes with Japan in the past few years during which Taiwanese fishing boats were harassed or arrested by Japanese coastguards, said James Sha, Taiwan’s Fisheries Agency chief.

“From now on the rights of Taiwan fishing boats operating in the water area will be better protected,” he said.

Taiwanese fishing boats will still be barred from entering waters in the 12 nautical miles off the disputed islands, a constant reminder of the international sovereignty row.

However Taiwan’s coastguards may sail in this area if required said the chief of the coastguards on Wednesday.

In January, coastguard vessels from Taiwan and Japan converged and duelled with water cannons in their latest stand-off as a boat carrying Taiwanese activists headed to the islands.

The incident came at a time of growing regional concern over the islands row between China and Japan, with both Beijing and Tokyo recently scrambling fighter jets to assert their claims to the area.

Coastguard vessels from Japan and Taiwan also exchanged water cannon barrages in September after dozens of Taiwanese boats were escorted by patrol ships into the islands’ waters.

Commentators say a fishing rights deal with Taipei is important for Japan because it might prevent Taiwan from joining hands with Beijing.

Japan and China have squabbled bitterly over the sovereignty of the islands, with frequent confrontations between state vessels from the two sides since Tokyo nationalised some of the chain in September last year.

The waters around the islands are considered potentially rich in natural resources, and Taiwanese fishermen claim ancestral fishing rights.

Around 800 trawlers from Taiwan operate in the area, with an annual catch of 40,000 tons, according to Taiwan’s Fisheries Agency.