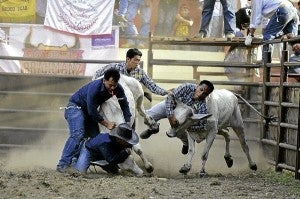 CATTLE WRESTLING on foot is among the crowd-drawing events in the Rodeo Masbateño Festival in Masbate, which ends April 15. Other events are bull riding, cattle lassoing, cattle wrestling from horseback and load-carrying relay roll out. ALEX SALLAN/CONTRIBUTOR

Election campaigning and its divisive nature in Masbate must step aside for the Rodeo Masbateño Festival, which celebrates one of the people’s unifying factors—a thriving cattle industry born from the exploits of ranch hands.

Since 2010, the festival, touted as one of the largest sports events in the country, has distanced itself from politics and veered away from being known as a game of the rich and powerful in a province notorious for poll-related violence.

According to Manuel Sese, a regional trial court judge in Masbate and president of Rodeo Masbateño Foundation Inc. (RMFI), the price of shunning politics has been high, but “there is no sliding back.”

“Masbate folks, who have come to appreciate the apolitical nature of Rodeo Festival, would complain when they see politicians taking advantage of the event,” Sese said.

The RMFI, an organization of cattle owners, has been running the festival for three years now after taking away control of the celebration from feuding politicians. It has been struggling to find sponsors for the many festival events that offer hefty cash prizes, Sese said.

So far, Sese said, no major glitches had emerged in the competition, which is evidently Western in concept as it is a spinoff of adventures in the American West.

The number of participants has doubled. Thirty-six teams or around 300 people are joining the rodeo events, coming from as far south as Camiguin and Bohol islands to as far north as Cagayan and Benguet.

“There is also an increase in the number of women participants,” Sese said. But he could not provide an exact number.

Greater participation and appreciation for the event among the residents have compensated for the lack of benefactors.

For instance, RMFI members chose to shell out money to cover this year’s fund deficit of P800,000, rather than “slide back” to the practice of seeking politicians for event sponsorship.

On Tuesday, Gov. Rizalina Seachon-Lanete said the festival had become a show window of Masbate, pointing out that it had helped boost local economy and tourism. She pledged P1 million for the festival.

Sese said the organizers were not cutting ties with politicians and were not rejecting their help, but they want to “keep the festival as independent as possible.” Being the top tourist attraction in Masbate, he said, they had to market it as a time to see “peculiar and distinct” shows that could be witnessed “only in Masbate.”

Many hotels and restaurants have been constructed in Masbate City to accommodate the large number of tourists flocking to the province every Rodeo season, Sese said.

Leo Gozum, a volunteer, said the festival had brought out the spirit of volunteerism among the people. Many, including the youth who are rodeo enthusiasts themselves, have been helping organize and facilitate the events, he said.

With the enthusiastic response of the people, they have demonstrated that it is possible to embrace lives away from the apparently “bad influence” of politics, Sese said.