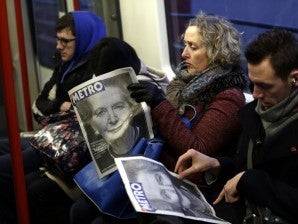 “It was agreed this morning at the government coordination meeting with the Thatcher family and Buckingham Palace that the funeral service of Lady Thatcher will take place on Wednesday 17 April at St. Paul’s Cathedral,” Downing Street said in a statement.

The queen does not usually attend funerals or memorial services of non-royals.

Thatcher, who died on Monday at the age of 87, will be given a ceremonial funeral, the second highest honor after a state funeral.