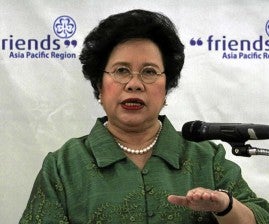 MANILA, Philippines –Senator Miriam Defensor -Santiago on Tuesday called the students of the state-run University of the Philippines “full of themselves” and described politicians seeking elective posts in May as “idiots.”

Speaking at the commencement exercises of the Our Lady of Fatima University held at the PICC in Pasay City, Santiago praised its students and blasted students of UP.

(I love you so much because you rose from poverty. You went through many difficulties, some of you even became working students. But you fare better than those from UP. Those from UP are so arrogant. They are self-centered.)

(Students from UP are no match for students of Our Lady of Fatima University. Their (UP students) tuition and other school fees are subsidized, they have no problem with money. Some of them hail from affluent families…)

Candidates running in the May elections did not escape Santiago’s sharp tongue while delivering her inspirational speech to graduating students of the university.

While stressing the value of being sincere with other people, Santiago cannot resist deriding candidates.

(Unlike today’s candidates who are flashing fake smiles and looking like idiots.)

Santiago also took a jab at candidates when she cracked her vaunted pickup lines.

(Why is it that the campaign period is scheduled during summer? Because this is the time the true nature of politicians is exposed.)

The following were her pick-up lines she unleashed at the graduation rites:

(If you don’t like him, tell him, ‘you know why the Anti-Cyber Crime Law passed? It’s because of your profile picture.)

(What’s the use of April Fool’s Day when you are being fooled every day?)

(If your boyfriend is getting cold towards you, drench him with gasoline and set him on fire.)