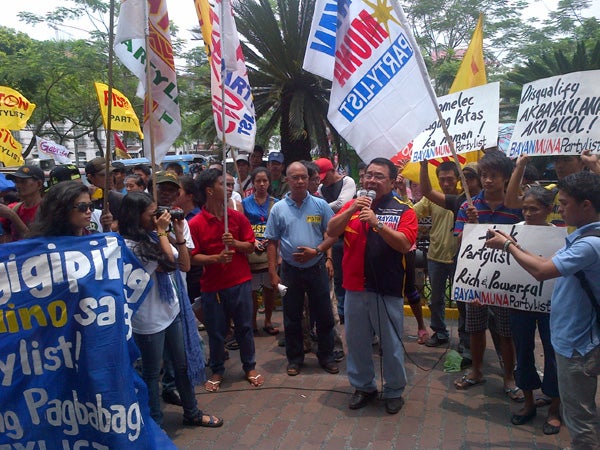 Bayan Muna representative Neri Colmenares speaks before the crowd during a rally at the Comelec Monday calling on it to defend its decision to disqualify the fake partylist groups. MATIKAS SANTOS/INQUIRER.net

MANILA, Philippines – A multisectoral group on Monday held a protest rally in front of the Commission on Elections (Comelec), urging it to stand firm on its decision to disqualify the “fake party-list groups” and to “demand reconsideration from the Supreme Court.”

“We call on the Comelec to defend its decision in disqualifying these fake party-list groups and demand reconsideration from the Supreme Court (SC),” it said in a statement.

“Makabayan urges the SC to reconsider its highly unpopular decision and preserve the long established social justice doctrine that the party-list system is only for the marginalized and the underrepresented,” it said.

Piston and Kabataan are under disqualification proceedings for violations of the campaign poster rule.

The SC earlier issued a decision allowing 41 partylist groups out of the 54 that were disqualified by the Comelec to run in the May 2013 elections.

Comelec maintained that they will follow the SC decision and will have to conduct hearings of the cases again using the new guidelines set by the SC, Comelec spokesman James Jimenez told reporters.

“Considering the length of time we have or don’t have, it’s possible [we will conduct] back to back hearings, daily hearings, marathon hearings,” Jimenez said.

He clarified that the Comelec en banc can set rules in order to finish the hearing of the cases faster.