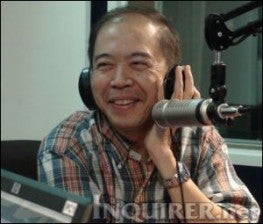 MANILA, Philippines – Malacañang said Sunday that President Benigno Aquino III could not intervene in a pending graft case against Rodolfo Lozada Jr. as it parried criticisms  Aquino has not shown support for the whistleblower.

Valte said that Lozada, as a party to the graft case filed by Philippine Forest Corp. president Erwin Santos, could move for the issuance of a subpoena duces tecum “to secure any documents needed for his defense.’’

A subpoena duces tecum is a court order to produce documents relevant to a case.

Valte did not comment on the reported disillusionment of Lozada’s supporters with the President.

Members of the religious and civil society groups had expressed embitterment with the President over his alleged lack of support for Lozada, who was ordered arrested by the Sandiganbayan over the graft case filed by Santos in 2007.

Sister Mary John Mananzan of the Association of Major Religious Superiors of the Philippines said she was “disillusioned’’ with Aquino because he was “dismissive’’ of Lozada in a Feb. 18 meeting in Malacañang.

In the meeting, Lozada and his supporters told the President that keeping Santos in Philforest would put Lozada at a disadvantage in court. The President said that Lozada could still obtain documents from Santos by asking the judge to subpoena these, Mananzan said.

In the past, Lozada rejected Aquino’s offer to be his patron when the former came home from Hong Kong to testify on the anomalous $329-million NBN-ZTE broadband deal, despite threats from the camp of then President Gloria Macapagal-Arroyo.

There is no plan to persecute Lozada while keeping Santos in the government, Secretary Herminio Coloma said.

“From what I had gathered, there is no project of personal vendetta against Jun Lozada,’’ Coloma, head of the Presidential Communications Operations Office, said in an interview by phone.

Coloma said Santos took over as Philforest president in February 2008 from Lozada after the latter quit following his exposé on the scuttled broadband deal at the Senate.

“That is totally different from insinuations that he’s there to pursue the complaint against Lozada,’’ Coloma said.