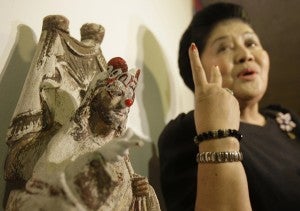 IMELDIFIC POWER Former Philippine first lady and now Congresswoman Imelda Marcos gestures beside an art sculpture by Filipino contemporary artist Mideo Cruz showing his version of Jesus Christ on display at Manila's Cultural Center of the Philippines, Monday, Aug. 8, 2011. The exhibit has provoked heated debate about freedom of expression in the predominantly Catholic nation. Marcos said after her visit that the work was a "desecration" and no longer represents art. (AP Photo/Aaron Favila)

The board of the Cultural Center of the Philippines (CCP) on Monday agreed to withdraw an art exhibit that combines religious symbols with phallic objects and which has provoked a heated debate about freedom of expression in the country.

This was disclosed by Ilocos Norte Rep. Imelda Marcos, widow of strongman Ferdinand Marcos and founder of the CCP 40 years ago, in the plenary of the House of Representatives.

The former first lady spoke after hearing the privilege speech of Manila Rep. Amado Bagatsing, who condemned the exhibit as sacrilegious and called for the resignation of the CCP board led by its chair, Raul Sunico.

Another sculpture showed a penis hanging from a wooden cross while another portrayed Christ as Mickey Mouse.

Mideo Cruz, who crafted the pieces, said the phallic objects were symbols of power.

Marcos said she examined the exhibit of images and figurines of saints and Jesus Christ titled “Kulo” by a group of 30 artists from the University of Sto. Tomas.

She said she went to the CCP in the morning after receiving a letter from the Catholic Bishops Conference of the Philippines expressing shock at the exhibit and seeking her intercession in stopping it.

“It was a shameful exhibit, especially so since it was placed in the Cultural Center of the Philippines. We built that to be the sanctuary of the Filipino soul and a monument to the Filipino spirit,” Marcos said.

She said the flag at the CCP symbolized “KKK”—katotohanan, kabutihan and kagandahan—or “the true, the good and the beautiful.”

“After seeing the exhibit I was really shocked because it was not only ugly, it was not true, it was not at all beautiful because there were statues and pictures of saints and Christ with horns and with his penis up and it was really a desecration of a spiritual symbol for Catholics,” Marcos said.

“In fact, even (former) President Marcos had (been depicted with) several penises. But this is the CCP, the sanctuary of the Filipino spirit and a monument of the Filipino soul. This is not at all right. This is ugly and, above all, a desecration of a sacred symbol,” she said.

Marcos said she immediately called Sunico and asked him to take down the exhibit and also spoke with other board members on the phone to ask them to close the exhibit.

“I think I was able to convince the CCP board. The majority of them had decided that they will withdraw and take out the exhibit. It should never happen again,” Marcos said.

In his speech, Bagatsing said he also went to the CPP on Monday but was not able to see the exhibit as it was closed on Monday.

He said the organizations that bestowed awards on Cruz should reconsider and withdraw the awards.

“Where in the world can you see the images of Jesus Christ with a penis? This is sacrilegious. It’s a very obscene exhibit. I don’t think they can call this art. There is a difference between art and insanity,” Bagatsing said.

“Only a sick mind can do this. Only a devil can think of that,” he said later.

Bagatsing filed a resolution that called on the CCP board to resign for allowing “the distasteful and sacrilegious” exhibit.