Motorcades to be banned; blamed for traffic, road rage 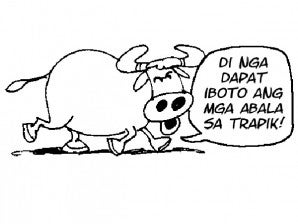 What?!  An election without motorcades?

Yes, if the Commission on Elections (Comelec) had its way.

To avoid traffic congestions, the poll body is set to ban campaign motorcades in at least 18 major thoroughfares in Metro Manila.

“We are approving the proposal in principle. Under the resolution, it will be banned totally in major thoroughfares,” Brillantes said at a press briefing.

The major roadways where motorcades could be banned include Edsa, South Superhighway, Boni Avenue, Taft Avenue, Avenida Rizal and C-5.

He said the resolution would most likely be released early next week.

Brillantes said issuing a motorcade ban was part of the Comelec function, especially since the roads mentioned were perennial problem areas due to the volume of vehicles moving through them.

Section 6 of Comelec Resolution No. 9615 includes vehicle motorcades as a lawful election propaganda but subject to regulation.

Brillantes clarified that the same rule could not be applied to political rallies held along highways and major roads. He said the police did not find political rallies as problematic as motorcades since rallies or political gatherings were stationary.

“Rallies are still subject to the permission of local government agencies,” Brillantes said, adding that the planned Comelec resolution would also include guidelines on the conduct of rallies.

Tolentino said he had asked the poll body to consider filing election offenses against candidates who use the main thoroughfares for unauthorized campaign activities.

“This will not be a mere traffic violation but an election offense,” Tolentino said in a statement. “We should make them realize the effect to the traffic flow of holding motorcades on major roads, especially when these are not coordinated with the proper agencies.”

He said traffic problems caused by campaign motorcades should be treated as a serious election offense, punishable in most serious cases by disqualification.

“We should draft and implement strict guidelines,” he said. “Any form of violation should be taken seriously, regardless of political affiliations. The candidates’ right to campaign is not absolute.”

Tolentino met with Brillantes to register the MMDA’s desire to be deputized to assist the Comelec in regulating the use of major thoroughfares for campaign motorcades and caravans.

In its petition, the MMDA pointed out that several election campaigns, caravans, rallies and other similar activities being held on major thoroughfares greatly affect the “already congested flow of traffic along major thoroughfares.”

“To mitigate the effects of traffic congestion … there is a necessity to regulate the conduct of election-related activities, particularly motorcades and caravans along major thoroughfares of Metro Manila,” Tolentino said.

Tolentino said the MMDA only wanted to regulate the time and duration of a campaign motorcade so the agency could prepare and avert problems.

“All we’re concerned of is the holding of these campaign caravans on major roads. It is not our intention to control the candidates’ campaign, particularly where to set up the stage for proclamation rallies and other activities,” he said.

Just like with common poster areas, Tolentino said the Comelec should set up common rally areas so campaigns would not hamper the flow of traffic.