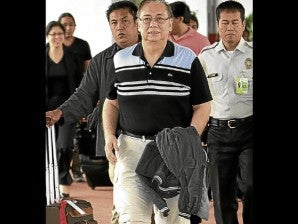 FIGHTING FORM Former First Gentleman Mike Arroyo is in fine fettle upon his arrival from Hong Kong on Monday. He later read a seven-page statement rebutting his critics. JESS YUSON

A combative Jose Miguel “Mike” Arroyo returned to the country from Hong Kong on Monday sneering at President Aquino’s antigraft slogan and threatening legal action against a businessman who had linked him to the anomalous purchase of used helicopters by the police during his wife’s presidency.

The former First Gentleman denied having any hand in the purchase but gave no indication that he would face the Senate inquiry into the 2009 deal.

“To my detractors, I am back! You should be ashamed of yourselves for peddling lies to the public while I was away, knowing fully well that I could not confront your lies in my absence,” Arroyo said in a prepared statement upon arrival from what he said was a medical checkup in Hong Kong.

The same morning, however, Mr. Aquino took a fresh swipe at the Arroyos in a speech in Camp Crame where, alluding to the controversial helicopter deal, he said the Philippine National Police would never again settle for second-hand equipment under his watch.

Presidential spokesperson Edwin Lacierda said Malacanang was looking forward to Arroyo’s promise that he would tell the truth and “not cloak himself under the right against self-incrimination or even invoke his health” problems.

Senators who had launched an inquiry into the deal said Arroyo should face them, while assuring him of fair treatment in the hearings. Sen. Francis Escudero, however, doubted whether Arroyo’s lawyers would let their ailing client be grilled.

The husband of former President and now Pampanga Rep. Gloria Macapagal-Arroyo arrived at Ninoy Aquino International Airport on a Cathay Pacific flight from Hong Kong, where he said he stayed for a week to undergo tests for a “life-threatening” heart condition called dissecting aortic aneurysm.

In his seven-page statement, Arroyo scoffed at President Aquino’s governance mantra matuwid na daan (the straight path), saying it had turned out to be a “national program of harassment and subordination to perjury.”

He said the Aquino administration appeared “hell-bent on making our lives miserable by resorting to trial by publicity.”

“We are left with no other recourse but to patiently and persistently defend our rights,” Arroyo said. “We do this to ensure that others who have been less blessed will not be similarly subjected to harassment and malicious accusations by a dictatorial administration that would even resort to exonerating criminals with the end view of punishing its perceived political enemies.”

Arroyo belied allegations that he flew to Hong Kong on July 31 to avoid a Senate blue ribbon committee investigation into the PNP helicopter purchase, saying he left the country two days before the panel began the hearings on Aug. 2.

He said the probe came as “a surprise to me,” particularly when businessman Archibald Po pointed to him as the original owner of two second-hand helicopters that were sold to the PNP as brand new in 2009.

“With respect to the insinuations which have been fabricated against me by Mr. Po, let me put it on record that I do not own those subject helicopters sold to the Philippine National Police,” Arroyo said.

“I did not purchase the helicopters from Mr. Po and I will not allow him at this opportunity to use my name to extricate himself from the criminal acts he has committed,” Arroyo stressed.

Testifying as the owner of aircraft distributor LionAir Inc., Po earlier said Arroyo bought five helicopters in cash to be used for his wife’s campaign in the 2004 presidential election, and that Arroyo later goaded him to sell two of the aircraft as brand new to the PNP.

“I wish to state clearly that I have no intention of avoiding accusations coming from Mr. Archibald Po, who seeks witness protection … in an attempt to escape liability for criminal acts by riding on the present administration’s wave of malicious persecution against the previous administration and my family,” Arroyo said.

He likened Po’s maneuver to that of jailed former Autonomous Region in Muslim Mindanao Gov. Zaldy Ampatuan, one of the prime suspects in the 2009 Maguindanao massacre case, who in June offered to testify for the government against his own father and brother.

Arroyo said his lawyers were studying the possibility of suing Po for perjury and for offering false testimonies in evidence.

‘No plan of govt’

Arroyo challenged the Aquino administration to file formal charges against him or his family in court, where he said they could answer them in “fair and just proceedings.”

The current national leadership, he said, had resorted to persecuting the past administration to make up for its “utter lack of an intelligent plan of government.”

He said government officials had gone to town with “inflammatory and irresponsible comments… in an effort to paint me as a fugitive on the run.”

Citing his health problems, however, Arroyo declined to field questions from reporters after reading his statement.

Will he face Senate?

At the Senate on Monday, Guingona assured Arroyo that he would be given “a fair chance to air his side” and that the chamber hoped that “he would take this opportunity to face the allegations against him.”

“As in previous Senate investigations, we would be mindful about his health condition during the proceedings,” Guingona said. “Considering he has problems with health, I hope he appears.”

Sen. Franklin Drilon reminded Arroyo that the public was just as interested as the Senate in determining the real owner of the helicopters.

Senator Escudero, however, was not as optimistic about the former First Gentleman’s attendance. “We might end up with nothing. Remember he is being advised by a lot of lawyers,” he said. With a report from Cathy Yamsuan and Christine Avendaño.