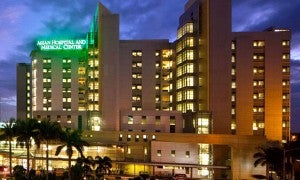 MANILA, Philippines—Asian Hospital and Medical Center (AHMC) denied that Baldwin Dee Co, the suspect in a vehicular accident that killed a police officer over the weekend, left the hospital through a “back door,” as what the police claimed.

AHMC issued the denial following the announcement of Chief Inspector Kimberly Molitas, spokesperson of the National Capital Region Police Office, that the hospital may be slapped with charges for allowing Co to leave the hospital.

Molitas said that AHMC would be in deep trouble if investigations would show that Co was able to leave the hospital through a different exit point while police officers were guarding the main exit.

Co figured in an accident on the Skyway elevated highway last Saturday around 11 p.m. when his “speeding” Ford GT Mustang rammed the vehicle boarded by Chief Inspector Ferdinand Rosario from behind as the policeman’s vehicle was slowing down to get to the side of the road.

The collision caused Rosario’s vehicle to crash into the center barrier and flip over. Rosario was declared dead on arrival in the hospital, while the three other officers who were with him survived.

Co is now a subject of manhunt operations after he allegedly left from the hospital where he was taken after the incident.

In a statement sent to INQUIRER.net, the hospital said that several investigators went to the emergency room to interview Co, as well as his father, Isidro at 1:50 p.m.

Isidro was the first one to be interviewed by the investigators outside the emergency room (ER), and then he accompanied them inside the ER to interview Co until 3:24 p.m.

“All policemen left immediately after conducting the questioning of the patient . . . at about 3:26 p.m. No policemen or investigator remained to watch over the patient,” the statement read, noting that no instruction or endorsement was given to the hospital’s security personnel.

Co’s camp settled the hospital bills at 4:28 p.m. and was discharged from the hospital “through the main entrance door of the ER.”

When two police investigators returned to the hospital at 5:39 p.m. to check on Co and eventually discovered that he has left already, they asked the security guard why the patient was allowed to leave, to which the guard replied: “The hospital has no authority to detain the patient based on hospital policies.”

It also said that the ER physician initially gave Co an admitting order for further observation, but he refused to stay in the hospital.

Co hasn’t been found since then, but Inspector Ferdinand Rosario of the Highway Patrol Group said Co is still in the Philippines.

Nonetheless, Rosario said they are working on getting a hold departure order from the Bureau of Immigration to make sure that Co won’t be able to leave the country.

Rosario, however, said the investigation also noted several lapses on the part of the police officers guarding Co.

Co has been charged by police with reckless imprudence resulting in homicide, physical injuries and damage to properties.