No food, no drink good for pols, bad for hungry voters 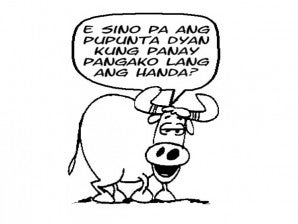 LUCENA CITY—A new ban on politicians providing food and drinks during election campaign rallies may be a boon or a bane for candidates.

The prohibition by the Commission on Elections (Comelec) means less campaign expense but also sparse crowds.

“We would rather sleep than spend time listening to self-serving speeches,” said Ronaldo Fernandez, a street vendor.

The Comelec said the prohibition applies “during the five hours before and after a public meeting, on the day before the election, and on election day.”

Fernandez, a father of two, rued the loss of opportunities for free meals during the 45-day campaign period for the May 13 elections.

He said in previous elections, people enjoyed not only sumptuous food, they were also able to bring home extra bags of rice and noodles.

Local candidates in Lucena then held several neighborhood political meetings or “caucuses” in the evenings or late afternoons. Sometimes there were two or three such happenings in one day in different parts of the city. Nonstop eating and drinking accompanied the events.

The politicians vied with each other on the quality of food and drinks served to get people to listen to their spiels.

Fernandez said he and his poor neighbors saw to it that they had the schedules of candidates of political parties so they could get their freebies.

“It’s important to know their whereabouts every day so that it would be easy to track them down,” said Romy Perlas, one of Fernandez’s buddies.

If they were lucky, they could coax a candidate to give them a few pesos. “We tickle him with stories that he was strong in our neighborhood. And we would be his campaign leaders,” Perlas said.

Those glorious days are now a thing of the past.

“It’s not because we are now able to save on campaign expenses. It’s because candidates now have a reliable barometer on how popular or unpopular they are based on the caucus attendance,” he said in a phone interview.

Talaga said voters now attended caucuses to listen and be enlightened on the platform of government of the candidates and not because of the free food and drinks.

“Now, if the attendance is sparse, the candidate has a problem. It gives him the chance to rethink his campaign strategy,” he said.

Talaga claimed his group always had a big attendance in its sorties despite the lack of freebies. He said this indicated voters’ interest and “enough moral boost.”

Quezon Bishop Emilio Marquez on Sunday said that one way of defending the Catholic faith was for the faithful not to sell their votes in exchange for cash, rice and other favors from politicians.

“What you’re selling is your dignity and self-respect, Marquez said in his homily at Saint Ferdinand Cathedral here.

For Fernandez, the vendors and the jobless in their neighborhood, keeping empty stomachs from grumbling could help while listening to politicians and deciding who would better serve them.

“No one among our families slept hungry after attending rallies in the past,” Fernandez said.