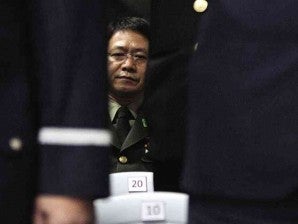 Brig. Gen. Eduardo Año remains seated after his confirmation as chief of the Intelligence Service of the Armed Forces of the Philippines was deferred by the Commission on Appointments on Wednesday. The officer was allegedly involved in the disappearance of activist Jonas Burgos.

That’s the directive issued by President Aquino to the National Bureau of Investigation when he ordered the agency to look into the April 2007 abduction of Jonas Burgos, son of the late press freedom icon Jose Burgos Jr., in the face of a purported new and explosive evidence implicating the military in the disappearance, Malacañang announced on Wednesday.

Presidential spokesperson Edwin Lacierda said in a news briefing that the NBI inquiry would cover officers and men of the Armed Forces of the Philippines and the Philippine National Police, who would not be allowed to reject summons by merely issuing a blanket denial of involvement in the case.

Lacierda said the President had instructed Justice Secretary Leila de Lima to direct the NBI to conduct a “focused, dedicated and exhaustive investigation” into the Jonas case.

“This is in fulfillment of the President’s pledge that any receipt of new evidence or leads will receive the scrutiny the case deserves,” he said, referring to a vow made by Mr. Aquino during a meeting with Jonas’ mother, Edita Burgos, before he assumed the presidency.

Lacierda said De Lima had asked NBI Director Nonnatus Caesar Rojas to form a special team to “ferret out the truth” about Jonas’ disappearance, and “determine who may be criminally charged.”

“As chief executor of our laws and as Commander in Chief, the President is mandated to do justice to every man,” Lacierda said in a news briefing.

Jonas Burgos was an agriculturist actively involved in promoting organic farming among the rural folk in Bulacan province. Previous news reports attributed to the military suggested that the young Burgos was a communist guerrilla commander. He was 36 years old when he was snatched by unidentified men on April 28, 2007, at the Ever Gotesco Mall in Quezon City. He has not been seen since.

The father of Jonas published hard-hitting newspapers against then President Ferdinand Marcos and was detained several times during the martial law regime in the 1970s.

‘Bomb’ of an evidence

Edita Burgos on Monday petitioned the Supreme Court to order the Court of Appeals to put on trial military officers and men for her son’s abduction, claiming she has a new “bomb” of an evidence against them.

The appellate court on March 18 ruled that Jonas’ abduction was an enforced disappearance and held Maj. Harry Baliaga Jr. and the Army responsible. It also tasked the Philippine National Police to conduct an “exhaustive investigation” of the disappearance.

In her urgent petition, Edita Burgos said she had confidential documents that would show officers and enlisted personnel of intelligence units of the 7th Infantry Division and 56th Infantry Battalion, operating together, abducted Jonas.

The documents, which she submitted in a sealed package to the high tribunal, purportedly included confidential official reports on file in the Army, including an after-apprehension report, psychosocial processing report, and autobiography of Jonas. The papers contained the identities of officers and men of the two units.

Edita Burgos earlier claimed that a military memo she had seen listed her son in an “order of battle” of communist guerrillas and that next to his name was written the word “neutralized.”

In an urgent memorandum on Wednesday, De Lima ordered Rojas to constitute a “focused” and “dedicated” special team of investigators that would conduct its own “speedy, exhaustive and independent” probe of the disappearance.

The team was directed to evaluate all information and evidence gathered by various agencies, such as the Commission on Human Rights, AFP and PNP, and “pursue other possible leads, collect further evidence and take all other necessary steps towards the end of ferreting out the truth,”  she said in the memo, a copy of which was released by Malacañang.

Asked what prompted the President’s directive, Lacierda said: “There’s new evidence, it will require scrutiny from us. And so, to provide justice for all, the President has ordered (De Lima) to look into it.”

Lacierda quoted Mr. Aquino as telling Edita Burgos previously that “if you have new evidence, let us know, and we will investigate.”

“Part of that investigation process will also require investigating the AFP, the PNP. And, as Chief Executive of the country, as Commander in Chief, there is no doubt as to the cooperation of the hierarchy,” he said.

After all, police and military agents cooperated in the NBI’s investigation of the Jan. 6 incident in Atimonan, Quezon, in which 13 people were killed, Lacierda said. The NBI said the killings in Atimonan were a “rubout,” or summary execution, and recommended the prosecution for multiple murder of several dozen police and military personnel.

Since it’s not under the AFP, the NBI could not order the preventive suspension of officers and men implicated in Jonas’ abduction, Lacierda said.

He said the NBI probe was independent of directives from the Court of Appeals to other agencies to look into the Jonas case.

“What we can assure the family of Mrs. Burgos is that we will look into all the evidence as they are presented. That’s the only guarantee that we have because as of now, they have not started the investigation yet. We will look into those documents and we’ll be able to— the NBI will be validating those documents,” he said.

In a text message to reporters, De Lima said that the NBI inquiry would “obviate any suspicion of lack of impartiality or whitewash” of the case. “The clear objective is to ferret out the truth and bring the perpetrators to justice.” With a report from Christine O. Avendaño