PANTUKAN, Compostela Valley—(UPDATE 3) At least 27 bodies have already been pulled out of mud as rescue and search operation continued in the disaster-hit area of Kingking village here.

Pantukan Mayor Celso Sarenas said among those dead were children but he could not say how many exactly. He said the toll count was as of 2 p.m.

Fears about more casualties have mounted as the number of missing persons could easily hit more than two dozen, sources said. 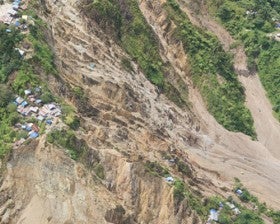 A landslide that hit a mining village in Compostela Valley on Good Friday left at least 27 people dead, according to authorities. AFP 10th INFANTRY DIVISION PHOTO

Six people were earlier rescued by soldiers, policemen and civilians after a part of a mountain collapsed in Panganason, Kingking village around 2:30 a.m., according to Lieutenant Colonel Camilo Ligayo, commander of the army’s 701st Infantry Brigade.

The site of Friday’s disaster which sits on a gold-rich mountain was also hit by previous landslides, the most recent in 2010, which killed at least 26 people.

Ligayo told the Philippine Daily Inquirer by phone that three helicopters from the military’s Eastern Mindanao Command have been dispatched to the site to help ferry possible survivors while sniffer dogs from the army were also sent in to help rescuers locate survivors.

“We feared at least 30 to 40 people missing. Our rescue efforts are concentrated in a collapsed mine in the area where five miners were reportedly trapped as voices were reportedly heard from the shaft, a possibility the victims are still alive,” Ligayo said, adding they were bracing for the worst.

Local social welfare officials and the office of Mayor Sarenas have set up a disaster action center in Kingking proper to address queries and requests, Ligayo said.

He said the victims included miners and their dependents as the landslide also wiped out houses, stores and ore milling plants locally known as ball mills.

The military official said intermittent rains in past days may have loosened the soil in the tunnel-saturated village, causing the landslide.

With a report from AP