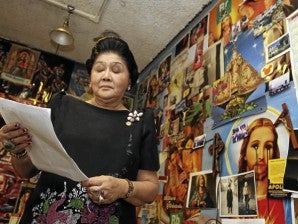 APPALLED. Imelda Marcos, who built the Cultural Center of the Philippines when she was first lady in the 1970s to showcase Filipino culture and arts, reads her statement of disgust over the controversial and “blasphemous” CCP art exhibit “Kulo,” which she viewed on Monday. INQUIRER PHOTO

MANILA, Philippines—The founder of the Cultural Center of the Philippines joined on Monday the uproar against an ongoing exhibit in the CCP, which Catholic leaders consider a desecration of Jesus Christ and the Holy Family.

A furious Ilocos Norte Representative Imelda Marcos, a former First Lady who put up the CCP to house the Filipino culture and arts in the 1970s, said she was considering filing administrative charges against CCP officials.

She called up Manila Rep. Amado Bagatsing twice on Monday, to express her displeasure over the exhibit “Kulo” by a group of 30 artists from the University of Sto. Tomas led by Mideo Cruz.

“Galit na galit (she was very angry). Sacrilegious daw (it was sacrilegious),” Bagatsing said of Marcos in an interview with the Philippine Daily Inquirer.

He said that Marcos was also particularly enraged by an image of Christ with a penis glued on his face and a figurine of Christ the King with rabbit ears, among others.

Bagatsing said that Marcos wanted “everything beautiful” in the Filipinos when she conceived the CCP.

He said Marcos found some images in the exhibit as shown on television “bastos (lewd, crass).”

Bagatsing went to the CCP on Monday morning to see the exhibit but was told that it was closed on Mondays. He said Marcos was also scheduled to visit the CCP in the afternoon of the same day.

In a radio interview, Marcos said that such sacrilegious artwork should not be given room in the CCP, which was created with the vision of being “a monument to the Filipino spirit… [or a] sanctuary to the Filipino soul.”

She said that she was told of “human rights… freedom of the arts” when she called the CCP but stated that it was wrong to exhibit artwork that would hurt or offend people, and desecrate beliefs.

Cruz’s art exhibit “Polytheism,” which has been part of an exhibit since June 17 and will be on display until August 21, has drawn criticism from bishops and lay groups.

A letter demanding that the exhibit be closed was sent to CCP president Raul Sunico last week.

Bagatsing was scheduled to deliver a privilege speech on Monday to demand the resignation of CCP officials, closure of the exhibit and the holding of a House inquiry on the abuse of freedom of expression in the exhibit.

Bagatsing said Marcos promised to stand by him in this cause. “She said she will support me in developing administrative charges against CCP Chairman Sunico and other CCP officials for allowing the showing of such kind of exhibit.”

Told that Sunico was a multi-awarded artist, Bagatsing said all the awards should be withdrawn as the sectors that gave could have erred in bestowing them.

“There is a clear distinction between art and baliw (insane). How do you distinguish between an art and insanity? Ano iyan abstract (what is that, an abstract)? Susmaryosep! That’s the work of a sick mind. Only a devil can think of that,” Bagatsing said.