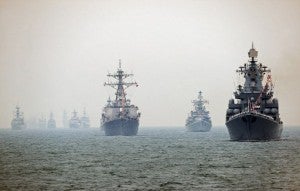 SEOUL – The United States has placed a destroyer off the South Korean coast to defend against a possible missile strike, the latest in a series of publicised US deployments to counter North Korean threats.

The USS Fitzgerald was moved to the southwestern coast after taking part in annual military exercises, instead of returning to its home port in Japan, a US defence official told AFP Monday on condition of anonymity.

The deployment came hours after a gathering of North Korea’s rubber-stamp parliament adopted a law formalizing the country’s status as a nuclear weapons state.

The Korean peninsula has been caught in a cycle of escalating tensions since the North launched a long-range rocket in December and followed it with a nuclear test in February.

Subsequent UN sanctions and annual South Korea-US military exercises have been used by Pyongyang to justify a wave of increasingly dire threats against Seoul and Washington, including warnings of missile strikes and nuclear war.

In this light, the shifting of the USS Fitzgerald was “a prudent move”, the US defence official said, adding that it would offer “greater missile defense options should that become necessary”.

Earlier on Monday, the US military announced it had deployed F-22 Raptor stealth fighters to South Korea as part of the ongoing annual “Foal Eagle” joint military exercise.

Pentagon spokesman George Little said the F-22s were an “important display” of US commitment to its military alliance with the South.

“The North Koreans have a choice. They can continue to engage in provocations, with bellicose, overheated, irresponsible rhetoric, or they can choose the path of peace,” Little told reporters.

North Korea has already threatened to strike the US mainland and US bases in the Pacific in response to the participation of nuclear-capable US B-52 and B-2 stealth bombers in the “Foal Eagle” drill.

But the tough talk has yet to be matched by action on the ground, according to US intelligence.

“Despite the harsh rhetoric we’re hearing from Pyongyang, we are not seeing changes to the North Korean military posture, such as large-scale mobilizations and positioning of forces,” White House spokesman Jay Carney said.

Meanwhile, South Korea’s new president, Park Geun-Hye, told senior military officials that any provocation from the North should be met with a “strong and immediate” military response, no matter what the political fallout.

The assertive US and South Korean stances suggest the two allies are working in close concert, and South Korean Foreign Minister Yun Byung-Se was in Washington for talks Tuesday with new US Secretary of State John Kerry.

The “continuing military threats from the North” will top the agenda, Yun’s ministry said in a statement.

The high-stakes standoff on the Korean peninsula has triggered widespread international concern of an accidental conflict that could escalate rapidly.

Some analysts, however, note that the most recent round of North Korean threats, while still extremely belligerent, have emphasized that Pyongyang would only act in response to a military attack from the US or South Korea.

Given that the prospects of such a pre-emptive attack are almost zero, this provides North Korean leader Kim Jong-Un with a face-saving exit, suggested Stephen Haggard, a North Korea expert at the Peterson Institute for International Economics in Washington.

Kim can argue that all the threats and military inspections “have in fact been successful at deterring an attack, even though it was not coming in any case”, Haggard said.

“So the regime can now claim success and step back,” he added.