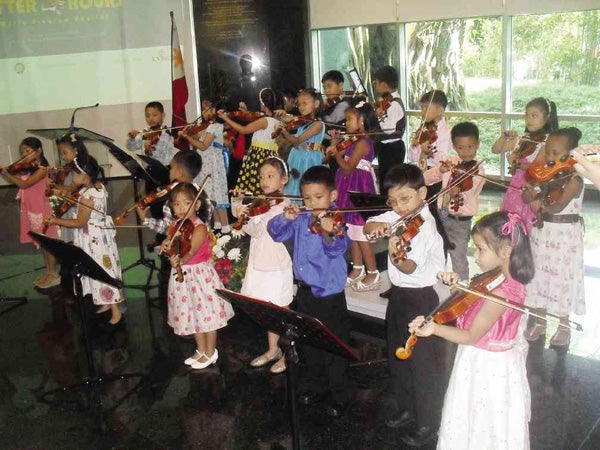 A young boy stepped onto a round platform, smiling and oozing with confidence. He hoisted a small violin on his left shoulder.

As soon as the pianist played the first note, he started to perform the folk song “Go Tell Aunt Rhody.” The audience was hooked.

Seven-year-old Aries Miko Lorca was one of 24 grade school performers at the recital held recently at Ayala Museum in Makati City. 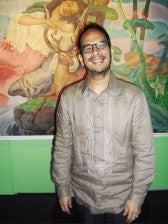 After his first piece, Lorca played Schulz’s “O Come Little Children,” his torso moving to the rising and ebbing of the music. The audience erupted in applause and laughter at the end of the boy’s performance.

The recital highlighted the After Hours Music Program of the Center of Excellence in Public Elementary Education (Centex), a project of the Department of Education (DepEd) and Ayala Foundation Inc. (AFI) that aims to “provide bright but economically disadvantaged  children with an education equal to that of the best private schools in the country.”

“The music program helps them become better students, better learners,”   Centex director Ramon Miranda said. “They have focus. They work hard. They have to follow instructions.”

AFI president Maria Lourdes Heras-de Leon said the lessons in the music arts taught the children “precision, accuracy, discipline, patience, problem-solving skills and responsibility,” not to mention that they gave the kids self-confidence.

De Leon added that children learned to play music in harmony with one another. “Aren’t these the same life skills we need at home?” she asked.

Miranda said  Centex is a public school that “combines DepEd curriculum with special subjects, such as music, self-esteem and computer arts… to ensure the development of the whole child.” The center was created 15 years ago with corporate partners and local government units. Today there are two Centex schools in operation—one in Tondo, Manila, and the other in Bauan, Batangas—with approximately 1,000 students from kindergarten to sixth grade.

Lorca’s mother, Ging, admitted she was surprised to learn that her son could play the violin. “No one in the family plays any musical instrument,” she said. 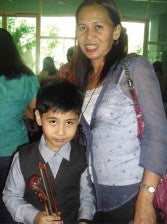 Prior to Lorca’s performance, Nicole Florence Manacpo played more advanced violin pieces, as did Jacky John Abucay on the cello.

Each student played two pieces during the two-hour recital.

Centex Manila’s violin and cello program began in 2011  with JP Morgan Chase as sponsor. Through a music aptitude examination, 24 were chosen from the 75 members of the class.

“If there was more funding, we’d include other classes,” Miranda said. “There may be someone out there who has the talent.”

After school every Friday, the selected students attended a two-to-three-hour special music class under world-renowned violinist Alfonso “Coke” Bolipata. They learned to play the violin or cello through the Suzuki method, which is based on the belief that “all children possess ability and that this ability can be developed and enhanced through a nurturing environment.”

Bolipata was assisted by two parents who learned to play the violin by watching over their kids as they practiced every   Wednesday    before they learned a new lesson every   Friday. The parents were also taught by Bolipata and mentored by the Pundaquit Virtuosi, the Creative Alternatives for Social Action, San Miguel Foundation’s resident string ensemble.

“I don’t find it difficult teaching these children,” said Bolipata, adding that “music is really all about self-esteem, confidence, excellence and responsibility.”

The students in the program are allowed to take home their violins or cellos so they can practice on their own.

The After Hours Program is also supported by the Philippine Charity Sweepstakes Office, Prospero World, Shigeru Kawai and Lyric Piano.