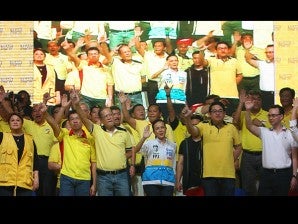 MANILA, Philippines–Security was tightened Monday along the vicinity of the Bonifacio Shrine in Manila in preparation for the Liberal Party-led coalition’s  proclamation rally later in the day that is expected to be graced by President Benigno Aquino III.

LP supporters clad in yellow T-shirts gathered at the Bonifacio Shrine beside the Manila City Hall as they await the start of the coalition’s proclamation rally.

Steel dividers were set up along the vicinity of the shrine to determine the area where supporters will position themselves when the program starts around 4 p.m. as scheduled.

Superintendent Ferdinand Quirante, the ground commander for the event, said “sufficient number” of policemen have been deployed to maintain peace and order.

The northbound lane of along A. Villegas from Taft Avenue corner Freedom Triangle UP to MET/Quezon Boulevard (P. Burgos) has also been closed down to motorists past 1 p.m. to give way for the event.

Quirante said the road will be reopened to vehicles after the event culminates around 10 p.m.