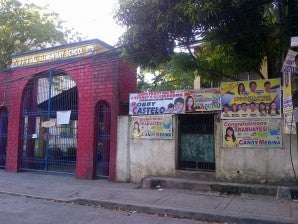 Posters of local candidates placed outside a school in Barangay Sangandaan, Project 8, Quezon City, on March 30, a day after the local campaign period started.

MANILA, Philippines – Campaign propaganda of local candidates proliferated in the streets despite repeated calls by the Commission on Elections (Comelec) for local bets to heed the campaign rules on postering.

The local campaign period officially started on March 29 but candidates were prohibited from campaigning since it was Good Friday.

According to Comelec Resolution 9615, it is prohibited “to post, display or exhibit any election campaign or propaganda material outside of authorized common poster areas, in public places, or in private properties without the consent of the owner thereof.” 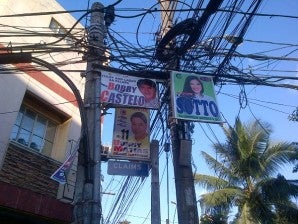 Street signs and electric posts and wires were not spared from election propaganda in Barangay Sangandaan, Project 8, Quezon City a day after the local campaign period began on March 29.

Comelec Chairman Sixto Brillantes Jr. has repeatedly warned candidates that if their election posters are found on prohibited areas, they will immediately be given legal notices to have those posters taken down within three days.

If candidates fail to remove their election propaganda in illegal places within three days, they would be charged for violating campaign rules and could face disqualification. 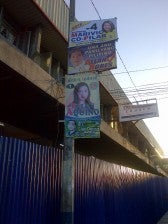 Three partylists, Kabataan, Piston, and the LPG Marketers Association (LPGMA) had previously been called to a hearing in the Comelec for their election propaganda found during the Comelec’s first ocular inspection around Metro Manila.

Comelec Education and Information Department Director James Jimenez called on the public to continue reporting to Comelec any violations of campaign rules they find through Twitter @Comelec and the hastag #Sumbong ko or via their website http://mycomelec.tv/campaignrules/feedback/