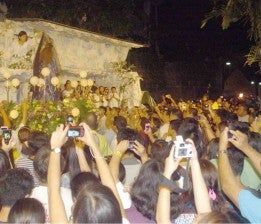 THE MEETING A risen Jesus greets a veiled Virgin Mary (left) in a symbolic re-creation of their first meeting after His resurrection from the dead 2,000 years ago. Joyful Catholics celebrated Easter Sunday in this photo taken in Barangay Lucban in Paco, Manila. RODEL ROTONI

MANILA, Philippines—Confetti rained down and children with angelic voices sang praises for the Risen Lord as Catholics around Metro Manila Sunday welcomed a new dawn with one of the most cherished of Filipino Easter traditions—the “salubong.”

The salubong is a symbolic re-creation of the meeting between Jesus Christ and His mother, the Virgin Mary, after His resurrection from the dead 2,000 years ago. At the re-creation, Mary’s deep sorrow is changed into great joy when she sees him alive.

Although it is not recorded in the Bible, Catholics believe Mary was one of the first people Jesus met after he rose from the dead.

In a homily at San Fernando de Dilao Parish Church in Paco during the Easter Vigil Mass before the salubong, Manila Archbishop Luis Antonio Cardinal Tagle urged Filipinos to seek the Risen Christ by helping the poor, the hungry, the homeless and those in prison

But he said Filipinos were more interested in rumors, personal attacks and sensationalism.

“It is very seldom that we hear news about the presence of Christ who has risen … When the word of God is being preached, we are asleep because it is not what we are looking for,” Tagle said.

Msgr. Pedro Quitorio, media chief of the Catholic Bishops’ Conference of the Philippines (CBCP), said the practice of the salubong began during the Spanish times.

“It was originally called the ‘encuentro.’ The priests then organized this to dramatize the meeting of the Risen Christ with the Virgin Mary. So it was meant to catechize or to teach the faith,” Quitorio said.

“The lifting of the veil is meant to symbolize the end of the Virgin Mary’s sorrows. It’s like saying, ‘Grieve no more for your Son is risen.’”

The “encuentro” is also observed in Latin American countries that were once colonies of Spain.

The traditional song for the occasion is the Regina Coeli, the ancient Latin hymm to the Virgin Mary. Its first three lines were supposedly heard by Pope Gregory the Great from what he thought were angels singing one Easter morning back in the 12th century.

The ceremony in Paco started around 8 p.m. on Saturday, and lasted for more than three hours. Afterward, the congregation marched out of the church in two groups behind two carriages bearing the images of the Christ and a veiled Mary.

The two groups went their separate ways and, after around 20 minutes, met again along Apacible Street, where the salubong took place.

In the Paco re-creation, children wearing white—some with made-up wings—sang praises as the two carriages met.

Then came the climax. A forklift, also covered in white, raised one girl dressed as an angel and she took off the veil from the statue of the Virgin Mary in the other carriage.

A shower of confetti then rained down on those present.

At the diocesan shrine of Nuestra Señora de Aranzazu in San Mateo, Rizal, more than 1,000 Catholics, many of them carrying lighted candles, gathered for the salubong in front of the church at around 4:30 a.m.

A choir sang a hymn as a girl dressed as an angel was hoisted up and took off the veil from Mary’s statue. The priest then celebrated Mass.

Tagle urged his parishioners to “seek the Risen Christ” and not dwell in modern “tombs” of sin and violence.

“What did the two angels tell the women (who were looking for Jesus Christ)? ‘Why do you seek the Risen One in the places of the dead?’ My brothers and sisters, what is it that we really seek? As baptized Christians, is it really the Risen Christ who we seek in our daily life?” Tagle said.

“Some people, when they look at their lives, they see no resurrection. What they only see are the negatives … only the tombs of their lives,” he said.

“But we can see from our readings that God moves in what we call the resurrection. From darkness, chaos and sin, God always answers by giving up His life,” he added.