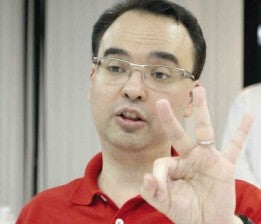 Like others in the so-called Genuine Opposition in 2007, Sen. Alan Peter Cayetano credits the widespread sentiment against then President Gloria Macapagal-Arroyo as the main reason he won his first term as senator.

In an interview with the Inquirer editorial staff, Cayetano recalled that his tirades on the House floor and outside the chamber against Arroyo and then first gentleman Jose Miguel “Mike” Arroyo even prompted a call from the late democracy icon Corazon Aquino.

“I see Ninoy in you. What can I do to help?” Cayetano quoted the widow of assassinated opposition leader Benigno Aquino Jr. as telling him. “I told her, ‘Ma’am, just your call,’” he said over dinner before the Lenten holidays.

As he seeks another term in the Senate in next month’s elections, Cayetano said it was no longer enough to have exposed corruption in the past regime, to have supported the futile attempts to impeach Arroyo and to have taken on her powerful husband.

“Before, it was already a big thing to be anti-GMA. But now, people would say, we already gave you your first term because you’re anti-GMA but for your second term, what would you do?” Cayetano said.

Cayetano, one of President Aquino’s chosen candidates, said while allegations of corruption and electoral fraud against Arroyo remained national issues “she’s one of A to Z, unlike before when she was all of the above.”

Arroyo, a Pampanga representative, is under hospital arrest. She is facing criminal charges ranging from electoral sabotage to plunder.

Told that President Aquino continues to bring up Arroyo’s alleged faults in his speeches three years after taking over Malacañang, Cayetano said, “Well, because for the President, [he has to present] how things were before and how things are now.”

Team PNoy’s campaign is based on how purported “good governance” under the Aquino administration has resulted in growth in the Philippine economy and supposedly improved basic services.

“But for senators, we have to present the situation now and what needs to be done tomorrow. [The President’s] not running so all he has to do is tell the people what it was before, and this is where we are now because of this administration,” he said.

“[Senatorial candidates] have to say, this is [what happened before] the six years you gave us but this is what we can do again in the [next] six years. So it’s quite different for us,” said Cayetano, who copped solo second and a statistical tie for first place in the Social Weather Stations’ latest election survey results released last week.

“Really, really different,” Cayetano said of his campaign in 2007 and this year.

“The first campaign had all kinds of problems. I had a namesake (a certain Peter Cayetano of Mindanao). FG (Mike Arroyo) was talking to all the mayors. Even people who were trying to help were told not to do so. In fact, at a certain point, I took it upon myself to tell them that I would no longer approach them because it was getting them in trouble,” Cayetano said.  “So it was really a struggle just to survive or to win.”

Cayetano said an opposition candidate in 2007 also couldn’t campaign on economic policy because it wouldn’t have been realistic.

“It was different during the time of GMA because it was all about democracy, rallies and even if I proposed anything on the economy during that time, I couldn’t have gotten the attention of GMA,” he said.

Even promising institutionalized government assistance for farmers would have been difficult.

“I couldn’t go around and talk about fertilizer because the discussion would still end up on the fertilizer scam [that involved then Agriculture Undersecretary Jocelyn Bolante],” Cayetano said.

“But now, for instance, at the Pritil market in Tondo, same thing with Murphy market in Quezon City and  the La Trinidad (in Benguet) trading post, they told me when they could have brisk sales but added that their capital is funded by five-six (lenders that charge 20-percent interest),” he added.

“That’s why I made a statement that the people don’t know about the 6.6-percent [economic growth] but five-six,” Cayetano said.

Cayetano credited his surge in the survey ranking to the nationwide “listening tours” in public markets, factories and farming and fishing communities.

The consultations, which kept him from joining Team PNoy rallies in the first two weeks of the campaign, led him to propose in his next term as senator a “conditional cash transfer (CCT) for business.”

He said this would do away with the atrocious five-six system that leaves the likes of market vendors, farmers, fisherfolk, workers and public transport drivers and operators with little cash to take home to their families.

Cayetano wants the government to make available P500 million worth of livelihood loans for each region.

“The [CCT] for children [of the country’s poorest of the poor] is what the President refers to when he says you cannot teach those drowning how to swim. But what we’re proposing is for those who’re already swimming but are in danger of drowning because they’re getting killed by the capital,” Cayetano said.

Cayetano is pushing for increased government spending to make the 6.6-percent economic growth felt by most Filipinos.

“[The farmers in] Bicol will not be able to compete with agriculture in Quezon and Batangas as far as supplying Metro Manila because they’re farther away. In industry, their power costs are high and they’re even hit by storms quite often,” Cayetano said.

“How can they produce good English speakers with the economy for call centers? Unless the government intervenes, the 6.6-percent growth won’t be felt,” he added.

According to Cayetano, he hates hopelessness, when people say certain problems can’t be solved, and people who don’t want to help themselves.

“But all three of these were absent in all of my listening tours. Even the poorest farmer, the poorest fisherman are full of hope,” he said. “It’s just a matter of how they could be helped.”