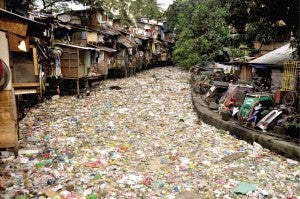 A TRASH-CHOKED estero in the slums of Sta. Cruz, Manila. Photo taken in January. EDWIN BELLOSILLO

What are their plans for the scavengers of Tondo? How will they address the garbage problem in Divisoria?

These are some of the questions that an environmental group wants the two contenders for the mayoralty in Manila—reelectionist Alfredo Lim and  former President Joseph Estrada—to address as it called on both to keep their campaigns “clean,” starting with their proclamation rallies over the weekend.

The EcoWaste Coalition (EWC) appealed to Estrada and Lim to use their kick-off assemblies Sunday and Monday, respectively, to present a  “green” platform for the city.

Voters have the right to know how Estrada and Lim plan to address the common environmental concerns of Manila residents, such as waste disposal and sanitation, it added.

“How do they plan to resolve, for instance, the persistent garbage problem at Onyx and Zobel Roxas Streets in San Andres or the monstrous plastic garbage in Divisoria, especially during peak shopping season?” Acting EWC National Coordinator Aileen Lucero said in a statement.

“How do they plan to improve the working and living conditions of the informal waste sector in Tondo and elsewhere who contribute to increased recycling rates at no cost to the city government?” she added.

“How do they plan to manage biodegradable discards, which constitute about half of the waste volume, from households and other major sources such as public markets and restaurants, so these are kept out of dumpsites and landfills to prevent the formation of methane?” she said.

The group also urged the mayoral candidates to disclose their positions on the proposed reclamation project off Manila Bay, the pollution at Pier 18 Garbage Transfer Station, the toxic impact of unregulated junk shop recycling of electronic waste in San Andres and Tondo, and the illegal sale of lead-tainted toys, mercury-laden cosmetics and cyanide-laced silver jewelry cleaners, particularly in Binondo, Divisoria and Quiapo.

“As senior politicians with vast experience and influence, we urge both President Estrada and Mayor Lim to campaign clean and to ask their fellow candidates and their supporters to do the same,” Lucero said.

“By campaigning clean, we mean no littering, no nailing or hanging of posters on trees, no posting of campaign materials outside designated areas, no excessive noise and, of course, no trash talks and dirty gimmicks,” she said.