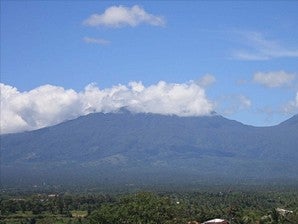 LUCENA CITY — After nine years of closure, the annual throng of Mount Banahaw Lenten pilgrims is now a memory.

Mount Banahaw Park superintendent Salud Pangan said the number of pilgrims who visited “sacred spots” at the still accessible lower areas of the mountain in Dolores, Quezon has dropped from an estimated 3,000 last year to only more than 1,000 on Good Friday.

“It seems that with other popular Holy Week destinations, Banahaw is no longer the favorite of Lenten pilgrims and summer trekkers,” Pangan said by phone on Saturday.

She cited the popular “Kamay ni Hesus” shrine in Lucban, Quezon; the 8.7-kilometer Mount Makiling trail; and the mammoth Virgin Mary monument in Tanay, Rizal as among the many other latest destinations of Lenten pilgrims.

“If this is the case, it is good for Mount Banahaw. She can continue her rehabilitation undisturbed,” Pangan said.

Banahaw used to be visited by about half a million people during the Holy Week until it was closed to the public in 2004 to allow areas damaged by slash-and-burn farming and littering to recover.

Banahaw, a traditional pilgrimage site for religious devotees and mountaineers, straddles the towns of Lucban, Tayabas, Sariaya, Candelaria and Dolores in Quezon and parts of the towns of Rizal, Nagcarlan, Liliw and Majayjay and San Pablo City in Laguna.

Pangan said Vice President Jejomar Binay and his daughter, senatorial candidate Nancy Binay, were among the small number of pilgrims who went to Banahaw on Maundy Thursday.

Binay, who has been visiting Banahaw during the Holy Week for the past several years, went straight to a sacred spot in Barangay (village) Kinabuhayan to pray and left the place after 30 minutes, Pangan said.

Pangan said Banahaw would remain close to the public until February 2015 but the management board overseeing the protection of the mountain and the adjacent Mount San Cristobal planned to reopen parts of the mountains to trekkers before that.

She said the Protected Areas and Management Board (PAMB) for Banahaw and Mount San Cristobal would open to campers and pilgrims spots that were not included in the restricted sections of Banahaw.

The PAMB’s plan was approved by DENR regional director Reynulfo Juan after a meeting held on March 14 in Nagcarlan, Laguna, she said.

Pangan said they would implement the plan within this year after they have mapped out the trails, firmed up regulations, decided on the fees and tourism products, and put all of these in place for the selective opening.

In a statement, Juan, also the PAMB chairman, said their initial assessment showed the protected landscape was able to recover during its nine years of closure, but stressed that threats to Banahaw have not been eliminated and it still needed more time to rest.