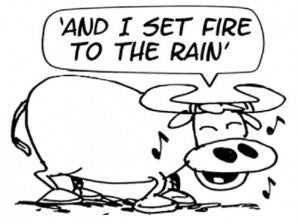 Expect “stars to fall like rain” from the night sky next month with the return of the annual Lyrid meteor shower, astronomers at the weather bureau say.

The Lyrid meteors come in late April when Earth plows through the dusty tail of the periodic Comet Thatcher (C/1861 G1) and flakes of the comet’s dust, most the size of grains of sand, strike the planet’s atmosphere at a speed of 49 kilometers per hour and disintegrate in the air as streaks of light.

The event lasts from April 16 to 26 and this year, according to the monthly astronomical diary prepared by the Philippine Atmospheric, Geophysical and Astronomical Services Administration (Pagasa), the Lyrid meteors will be most visible in the evening of April 22.

“The shower typically generates a dozen meteors per hour under optimal conditions,” according to the Pagasa report prepared by officer in charge Vicente Malano.

Usually, the shower produces 15 to 20 meteors per hour but better displays sometimes occur when the Earth glides through an “unusually dense clump of [comet] debris.”

Malano says the Lyrid showers will peak on April 22. “Although not numerous, Lyrids are bright and fast meteors,” Malano says.

But a “bright gibbous moon” that night might obscure the light of fainter meteors before dawn, he says.

The Lyrid meteor shower has been observed for more than 2,600 years.

“Chinese records show that ‘stars fell like rain’ during the meteor shower of 687 BC. However, in recent times, the Lyrids have generally been weak,” Pagasa says.

The Lyrids are so called because they appear to stream from a point in the constellation Lyra, according to a posting on the website of the National Aeronautics and Space Administration.

That point in Lyra seems to be the bright star Vega, a brilliant blue-white star about three times wider than the sun and 25 light-years away from Earth.

Vega is the star in the movie version of Carl Sagan’s novel “Contact.” It was the source of the alien radio transmission to Earth monitored by the group of astronomers led by Jodie Foster. With a report from Inquirer Research