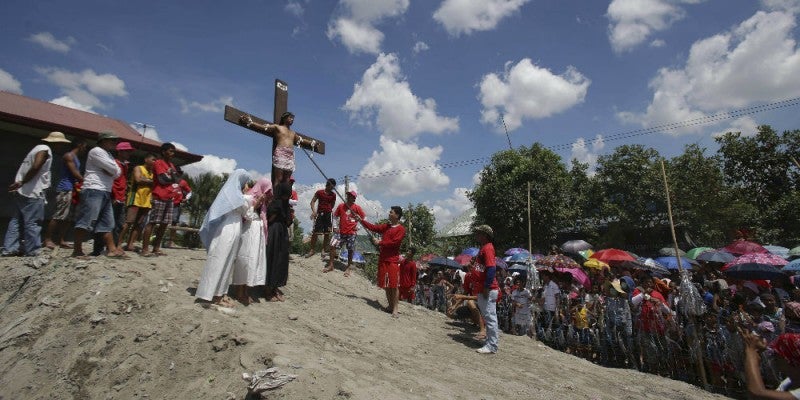 A Filipino penitent is nailed to the cross during Good Friday rituals on Friday, March 29, 2013 at Cutud, Pampanga province, northern Philippines. Several Filipino devotees had themselves nailed to crosses Friday to remember Jesus Christ’s suffering and death, an annual rite rejected by church leaders in this predominantly Roman Catholic country. AP Photo/Aaron Favila

SAN FERNANDO, Philippines–Catholic zealots in the Philippines re-enacted the last hours of Jesus Christ on Good Friday, whipping their backs and nailing themselves to crosses in a grisly Easter ritual that persists despite Church disapproval.

Foreign and local tourists flocked to the outskirts of the city of San Fernando, a 90-minute drive from Manila, to see the annual spectacle where a Christian “passion play” is taken to its blood-soaked extreme.

At least 18 men had nails driven through their hands and were hung up on crosses under the hot sun in vacant plots around the city.

Elsewhere hooded men lashed their bloody backs with cloth and bamboo whips, doing penance for their sins while spraying onlookers with flecks of blood.

Devotees undergo the hardships in the belief that such extreme sacrifices are a way to atone for their sins, attain miracle cures for illnesses or give thanks to God.

Laranang, a short, sunburnt man who sells baked buns to bus passengers, said: “It is just like a needle going through my hand. After two days, I am ready to go back to work again.”

So far, he told Agence France-Presse, his suffering has been rewarded as his wife and children enjoy good health and he continues to make a decent living.

“I am doing this for my family, so that no one will get sick and that my livelihood will continue. I am just a poor man. But I don’t ask God to make me rich,” he said.

It was the 27th crucifixion for sign painter Ruben Enaje, 52, one of the most popular penitents from San Pedro Cutud village. He began his yearly rite after surviving a fall from a building.

Enaje screamed in pain as men dressed as Roman soldiers hammered stainless steel nails into his palms and feet. A wireless microphone carried his voice to loudspeakers for everyone watching to hear.

His cross was raised and he was hanged there for several minutes under the searing afternoon sun before the nails were pulled out and he was taken on a stretcher to a first aid station.

At least two of the men hung on crosses had to be carried away on stretchers after being taken down, but most managed to walk to a medical tent for treatment as Western tourists snapped pictures.

Norwegian Charlotte Johanssen, 26, a Manila resident who was among the crowd of onlookers, said some of her visiting friends had found the sight too much to take.

“I have friends who felt sick to their stomachs and who got nauseated,” said Johanssen, who works for an aid group in the Philippine capital.

“There are those who get amazed. You can’t imagine how anyone can subject themselves to this kind of pain,” she said.

“It’s intriguing and fascinating what makes people do something like this, how you can believe so much that you make yourself suffer to that extent,” said Dita Tittesass, a tourist from Denmark. 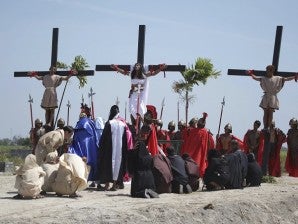 BLOODY RITUAL Filipino penitent Ruben Enaje, center, who has portrayed as Jesus Christ for 27 times, is nailed on the cross as he leads others in a reenactment of the crucifixion of Jesus Christ during Good Friday rituals in Cutud, Pampanga province. AP

Remigio de la Cruz, the chief of San Pedro Cutud village, explained that the practice began in his village in the 1950s.

The mock crucifixions have been going on for decades despite official disapproval from the Catholic Bishops’ Conference of the Philippines (CBCP).

Archbishop Jose Palma, president of the CBCP, told the church-run Radio Veritas that the practice is “not the desire of Jesus Christ.”

“We are aware that this has been practiced long before … but we still hope that this will not be done any more,” he said. “We should all concentrate on prayers.”

“The bishops have been saying for a long time they disapprove of this. But people make such vows. They sacrifice themselves for others,” said Father Francis Lucas, executive director of the CBCP media office.

“We have so many crosses to bear in life. We don’t need to bear a real one,” he told AFP.

He also warned against efforts to use the event to boost tourism, saying: “That is really wrong”.

San Fernando City conveniently listed the locations and schedules for the mock crucifixions on its tourism website, complete with a map so visitors could follow the action.

The Philippines, a former Spanish colony, is home to more than 80 million Catholics and the Church wields strong influence, ensuring that divorce and abortion remain illegal.