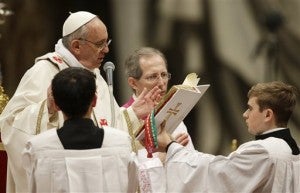 VATICAN CITY- Pope Francis called on lackluster priests on Thursday to liven up their masses and preach to their congregations with zeal, to overcome the “crisis of priestly identity.”

“The so-called priestly identity threatens us all and adds to the broader cultural crisis,” the pope told hundreds of cardinals, priests and bishops during his first Holy Thursday homily in St. Peter’s Basilica.

The Argentine pope used the image of the holy oil with which Aaron the Priest is anointed in the Bible — which is poured on his head and runs down in rivulets — to describe the way that priests should touch the lives of the faithful.

“A good priest is recognized by the way his people are anointed. For example, when they leave mass looking as if they had heard good news,” he said, before blessing a silver urn full of oil.

Those who remain distant from their flocks “miss out on the best of our people, on what can stir the depths of his priestly heart,” he said.

“Those who do not go out of themselves, instead of being mediators, gradually become intermediaries, managers. This is precisely the reason why some priests grow dissatisfied, lose heart,” he added.

Since his inauguration to the papacy last week, the Latin American pope has stressed his desire to bring the Church closer to ordinary people.

His call to priests to liven up masses may also be a bid to fight growing secularism in the West.

“In the contemporary world… the only thing that counts is ‘unction’, not function,” he said, referring to the religious ritual of anointing someone with oils.

Later on Thursday, Francis will wash the feet of 12 young prisoners in the Casal del Marmo prison in northwest Rome, continuing a tradition based on the belief that Christ washed the feet of his apostles before the final meal together before his crucifixion.