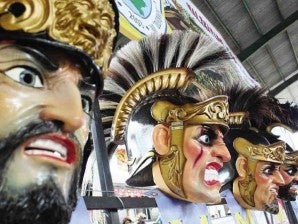 Local residents, officials and employees from the public and private sectors donning costumes of Morions have turned Boac, the capital town of Marinduque, into a small Jerusalem during the annual community parade of costumes on Holy Monday.

The island province welcomed tourists and devotees to its Moriones Festival during the traditional parade of Morions or masked centurions, their colorful characters, a parody of Roman soldiers during the time of Christ.

This year, among the visitors are “groups of Korean bloggers, media people and photography enthusiasts,” he said.

The newest attraction of the Moriones Festival, the “Battle of the Morions,” now on its fifth year, will be held at 4 p.m. today at the Santa Cruz town plaza. Different competing Morion groups will showcase various choreographed movements, marching drills, sword and spear skills drills and military formations along with the beat of percussion instruments, just like what Roman soldiers did.

The climax of the Lenten celebration will be the “Pugutan,” Marinduque’s other version of the Passion of Christ or cenaculo, which depicts the life of Longinus who was arrested and beheaded for spreading the news of Christ’s resurrection.

Usually done at night, the Pugutan will be held in Santa Cruz town on Good Friday, in Boac and Gasan towns on Black Saturday, and in Mogpog and Torrijos towns on Easter Sunday.

As a finale to the Lenten activities, there is the Gasang-Gasang Festival of Gasan, a street dancing competition to be held at the town proper of Gasan on Easter Sunday when everyone is in a festive mood for the resurrection of the Lord Jesus Christ.

The Moriones originated in the northern Marinduque town of Mogpog in the 1800s when a reenactment of the crucifixion was staged by local priest Padre Dionisio Santiago.