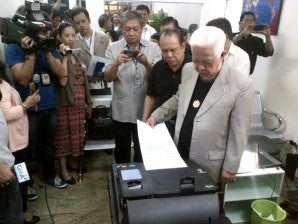 Comelec Chairman Sixto Brillantes Jr. leads the opening of the PCOS Demonstration Center in the Comelec main office that will allow voters to get a first hand experience in automated voting. INQUIRER.net/Matikas Santos

“We are going to wind up the discussions, I hope [negotiations won’t] bog down at the end part; every time we go into negotiations there are always disagreements,” Comelec Chairman Sixto Brillantes Jr. told reporters Wednesday.

The source code of the PCOS machines is the computer-programing language that makes the machines run. Dominion, which owns the technology of the PCOS and had licensed it to Smartmatic, is refusing to release the source code because of a pending legal case against Smartmatic.

Dominion had canceled its license agreement with Smartmatic back in 2012. Dominion has been asking for $10 million from Smartmatic for the use of the source code.

Several interest groups are asking a review of the source code which is supposed to be conducted three months before the elections in accordance with the Automated Election System law.

Brillantes said that it was now a probability that the source code will be released. He has been negotiating with representatives of both sides in order to get the source code.

“[The negotiations are] moving along now. We hope to finish by Saturday and by Monday and we expect all the details,” Brillantes said.

The formal announcement could be made on Monday after the negotiations, he added.