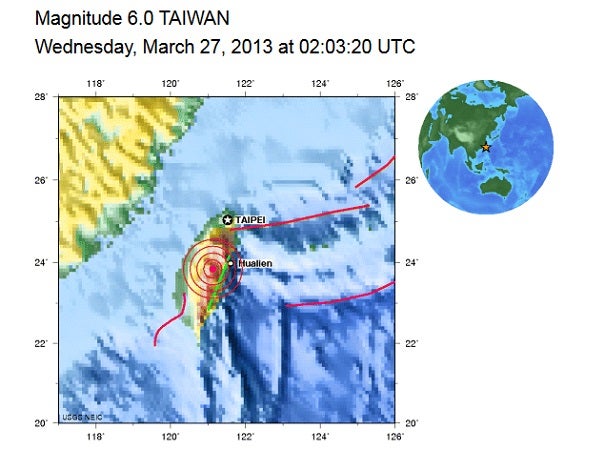 TAIPEI — A strong earthquake struck central Taiwan on Wednesday, killing at one person and injuring 19 as it damaged buildings on the quake-prone island.

The Central Weather Bureau said the magnitude-6.1 earthquake was felt throughout the island. Buildings swayed in the capital Taipei, and sections of the high-speed rail were suspended from service to be inspected for damage.

The U.S. Geological Survey placed the magnitude at 6.0. The quake’s depth was a relatively shallow 15 kilometers (9 miles).

Emergency officials said a 72-year-old woman became the first known fatality from the quake. They said she died when a temple wall she was standing next to collapsed and crushed her in the mostly rural county of Nantou.

Near the Nantou epicenter, a section of a ceiling fell from a government office and injured one worker, officials said. All-together, at least 19 people were injured, mostly by falling objects, the Fire Department said. A house fire caused by leaking gas was quickly put out, it added.

Nantou is a rural county about 250 kilometers (about 155 miles) south of Taipei. It is near the epicenter of a magnitude-7.6 earthquake that killed more than 2,300 people in 1999.

Earthquakes frequently rattle Taiwan, but most are minor and cause little or no damage.