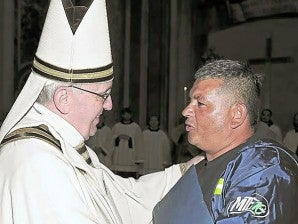 Handout picture released by Sergio Sanchez showing Pope Francis greeting Argentine “cartonero” (a person who collects cardboard and other recyclable items to sell them) Sergio Sanchez at the Vatican, on March 19, 2013. Pope Francis, wearing the mantle of a humble advocate for the poor while defending Catholic orthodoxy, rose from modest beginnings to become the first Latin American leader of the 1.2 billion-strong Church. AFP PHOTO

BUENOS AIRES—Sergio Sanchez stood behind Pope Francis at his Vatican inauguration ceremony, wide-eyed amid all the pomp, glitter and VIPs of a slice of history.

That was Tuesday, but on Friday he was back at his job in Buenos Aires, hunting for anything useful in the city’s garbage.

Sanchez is a leader in one of Argentina’s lowliest professions—head of a 3,000-member garbage scavenger cooperative in the capital.

But he was friends with Jorge Mario Bergoglio, archbishop of Buenos Aires, before Bergoglio became leader of the world’s Catholics.

“He was always with us at Mass preaching against slave labor, against sexual exploitation, and in favor of the poor,” the

Sanchez was invited to join the Argentine delegation to the Pope’s inauguration. Another guest was schoolteacher Jose del Corral.

“He knows me well. That’s why I was chosen to go to the Vatican,” Sanchez told AFP. “But any of us could have gone. He kissed Jose and me and hugged us, and told us, ‘Keep up the fight!’”    Both men had a place of honor during the inauguration.

“We walked behind him and entered a large hall. There were the presidents, the kings, but we were there … like his family,” Sanchez beamed.

Rewind to 2001: Argentina’s economy was in a tailspin.

There was a run on the banks, forcing the government to freeze bank accounts and allow only small withdrawals.

By the end of the year Buenos Aires was a battle zone, with protesters clashing with police and dozens of roadblocks set up by angry mobs protesting government policies.

Unemployment soared, poverty rose to a shocking 57 percent, and Argentina is still recovering.

At the time Sanchez was working as a truck driver, but when the owner of his truck company went bankrupt, he was forced to find a new line of work.

“I became a cardboard scavenger with my wife and my children,” he said.

Sanchez prefers to describe his line of business as “recycling.” People in his profession are generically known as “cartoneros,” a term that could be generously translated as “cardboard specialists.”    “I don’t know how to write well and I’ve only completed elementary school. But I do know how to think,” Sanchez said.

To this day groups of “cartoneros” scour the streets of Buenos Aires sifting through the city’s waste in the dark of night.

They climb into garbage dumpsters, search the city’s trash cans and sift through the bags of household refuse searching for wood, metal, plastic, paper and cardboard—anything that can be sold to recyclers.

The scavengers, sometimes equipped with carts pulled by horses, sometimes tear open the garbage containers and leave a big mess—to the dismay of the city’s middle-class residents.

They personify the misery to which much of Argentina, once a proud and wealthy exporter of beef and wheat, has fallen.

In the early days of the crisis, the scavengers worked independently, but over the years they organized into cooperatives. Today they work together to separate the recyclables and have regular buyers.

Sanchez is getting tired with his 15 minutes of fame and the media attention it has garnered. After a quick meal, he is back to work, heading out to help manage his cooperative members in another night of dumpster diving.

With that day in the Vatican now just a memory, he quotes a song from the popular Spanish folk singer Joan Manuel Serrat that says the poor will remain poor, the rich will stay rich, and priests will go back to saying Mass.

But Sanchez, interviewed after some 15 hours of work sifting through garbage looking for something of value, says he will not forget this new Pontiff.

“Once, Bergoglio said in Mass that they are killing our brothers and sisters who are reduced to slavery, in clandestine sweatshops, in prostitution rings, the kids who beg,” Sanchez said.