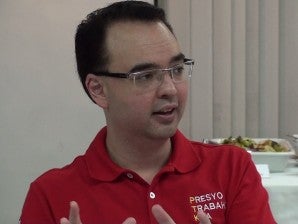 They spent it with their “Lola Talet” and more than 50 other members of Lani’s clan in this geothermal-gas-rich town in Albay province.

Taking some time out from the campaign through Bicol, they made a surprise visit to Lola Talet, or Estelita Campo Clariño, 86, Lani’s grandmother.

Lola Talet, who shuns dentures because they irritate her gums, loves to eat vegetables, rice porridge (lugaw) and “sometimes pancit,” and plays bingo, a daily pastime at a neighbor’s house, from 1 p.m. to 5 p.m., according to clan members.

Lola Talet is mother to a brood of nine, among them Ceferina Clariño Lopez, Lani’s mother, who traces her family roots to this town.

Lani, or Maria Laarni, attended Grades 2 and 3 at Barangay Cale Elementary School in this  town.

Lola Talet said Lani was a “bright and obedient pupil” during her elementary school days, remembering that Lani walked to school.

She said Lani and her sister stayed with her for two years, from 1989 to 1991, at their ancestral home in Barangay Cale, 3 kilometers from the town center.

After 1991, Lani’s mother decided to take Lani to Bulacan to continue her studies there.

“My mother, who runs a small eatery, a carinderia in Marilao town, was the family’s sole breadwinner,” Lani said.

She said she was in Grade 6 when she was orphaned after her father died in 1994.

Lani finished mass communication at Centro Escolar University in 1991. In 2001, Lani joined the staff of then Sen. Renato Cayetano as executive assistant.

Alan was on his father’s staff and that’s where he met Lani. They fell in love and married on March 22, 2004.